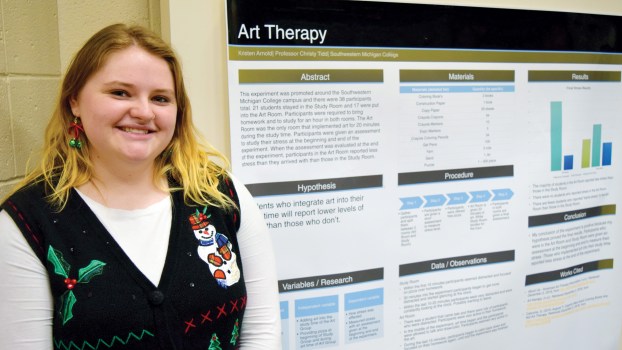 Southwestern Michigan College student Kristen Arnold poses next to poster showing the results of her recent art therapy experiment at the college. Arnold will present her findings at a national psychological conference next spring. (Submitted photo)

DOWAGIAC — What a difference a year makes.

Three Southwestern Michigan College students, two barely out of high school and  the third still in high school, will get the chance to attend a higher education national conference next spring.

Their stories are unique, but speak to the opportunities SMC can provide to students, even in their freshman year, college representatives said.

Arnold, a William M. White Hall resident assistant, developed a psychology poster presenting her art therapy research, and hopes, by presenting, to take it to the next level during her final semester at SMC, before transferring to Western Michigan
University.

Arnold has already benefited from attending the MPA meeting with faculty last year.

Christy Tidd, psychology faculty, said that Kristen’s “experience of going to an academic conference is unparalleled. Being there last year gave Kristen the motivation and courage to become a presenter.”

Arnold’s experiment attracted 38 participants on a Friday afternoon with pizza. The students were split into two study rooms, one of which encouraged the use of art (crafts, coloring, drawing) for a 20-minute break, while the other room had no art break.

Those students quickly became distracted and lost focus on the homework, while the students in the art room reported diminished stress, according to an assessment given to participants to test Arnold’s hypothesis: “Students who integrate art into their study time will report lower levels of stress than those who do not.”

Harmon, who wants to be a school psychologist, was inspired by Arnold’s study, and researched the impact of different music genres
on studying.

“I’ve always heard classical music is helpful, so I wanted to test that,” Harmon said.

She compared the effects of silence, classical music, music with lyrics and white noise on student study habits.

Her research found that classical music stimulates the brain.

“When I really want to focus, I turn on classical music,” she said. “White noise is (next-best). With silence you get (lost) in your thoughts or distracted by someone else’s pencil tapping. With lyrical music, you can easily focus on the words instead of what’s right in front of you.”

Grisham, who plans to be a future neurosurgeon, studied the benefits of animals in classrooms. She tested the hypothesis of whether the addition of an emotional support animal — in this case, a dog — in a classroom would positively affect productivity while decreasing stress.

She tested this hypothesis by having dogs brought to one of two of Tidd’s Psychology 101 courses, then compared students’ reactions along with the coverage of material.

On a scale of 1 to 5 (1 being most negative to 5 being most positive), student responses averaged 4.2. More importantly, Tidd noted that more material was covered in the section with the dogs, in part because students were clearly more engaged and responded to questions more quickly and effectively.

Grisham should be able to build off this experience when she eventually transfers from SMC to Wayne State University.

The MPA annual meeting takes place April 12 to 14, 2018, at Chicago’s Palmer House Hilton, with the goal to share research across all areas of psychology. The conference features invited addresses and talks from leading psychologists across the United States, papers and posters addressing a wide range of topics in current psychological science, workshops addressing the teaching of psychology, research methods and statistics and discussion groups, roundtables, and social events where members share ideas
and interests.

This year, the conference will feature SMC students, along with faculty Tidd, Christi Young and Don Ludman, among the many professionals, students and general public who routinely attend.

Southwestern Michigan College is a public, residential and commuter, community college, founded in 1964. The college averages in the top 10 percent nationally for student academic success based upon the National Community College Benchmark Project.

Southwestern Michigan College strives to be the college of first choice, to provide the programs and services to meet the needs of students, and to serve the community, administrators said. The college is accredited by The Higher Learning Commission of the North Central Association of Colleges and Schools, and is a member of the American Association of Community Colleges.

DOWAGIAC — As a holiday gift to the community, Southwestern Michigan College will host two free concerts at 2 p.m.... read more