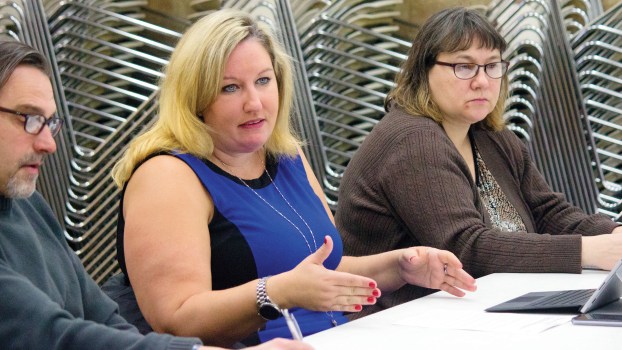 CASSOPOLIS — With the surge of potential new medical marijuana facilities opening in communities like Niles, Buchanan and Cassopolis, cannabis has been the drug du jour discussed by local officials over the past year.

On Thursday, however, a group of law enforcement and medical leaders gathered inside the Cass District Library in Cassopolis to share their thoughts on a substance that has continued to wreak havoc on local residents: opioids.

Around a dozen officials sat down to talk about the issue of diversion of opioids and other issues surrounding the abuse of painkilling medication in the local community during the latest meeting of the C.A.S.S. Coalition that morning. Members of the Cass County Prosecutor’s and Sherriff’s offices, Dowagiac Police Department, Cassopolis Family Clinic Network and other agencies joined in the round table discussion about the topic.

CFCN Medical Director Genevieve Lankowicz, who proposed a talk on the topic of opioid abuse prior to Thursday’s meeting, kicked off the panel by sharing some of the ways the local clinic — a Federally Qualified Health Center — is combating the issue.

The facility is in compliance with state regulations passed over the last several years, including tracking patient prescriptions through the Michigan Automated Prescription System, which launched earlier this year.

CFCN staff also discuss with patients the potential side effects and harm that could come with using prescription opioids, and perform unannounced drug screenings at least once a year for patients taking medication that is categorized Schedule II or above by the Drug Enforcement Administration.

No matter the amount of regulations or policies regarding painkillers, the main job of CFCN physicians is to care for patients, Lankowicz said. For those dealing with severe pain problems, it is often the best course of action to prescribe an opioid medication, though it can sometimes be difficult to determine which patients are in genuine need of painkillers and which are simply making up symptoms in order to get their hands on prescription drugs, she said.

“It all makes for a fine mess to tease apart,” Lankowicz said.

Lankowicz said one the main issues the clinic staff sees is patients who are diverting their opioid medication. In some cases, elderly patients claim to have pain problems, but, after they are prescribed a large quantity of opioid painkillers, they test negative for the substance during a screening, indicating they are giving away their pills to someone else.

Unfortunately, even when physicians notice these warning signs and cut off their patients, they often face threats of violence, Lankowicz said.

“It’s unnerving,” she said. “We just had someone in our organization receive a phone threat. Who needs that on a Friday afternoon?”

Lankowicz asked others at the table how the clinic should handle reporting suspected opioid abuse among patients, which may be an issue because it could violate federal health care privacy codes.

Chief Assistant Prosecutor Tiffiny Vohwinkle recommended that physicians use an anonymous tip line to report any suspected opiate abuse. She also said that such reports would fall outside the privacy guidelines in the Health Insurance Portability and Accountability Act, as the drug issues — in particular pill diversion — is an illegal act.

“Yes, it’s Medicaid fraud, it’s Medicare fraud — but frankly, it’s delivery of a controlled substance, which is a 20-year felony,” Vohwinkle said. “They just have to hand [the drugs] over to someone. They don’t even need to get money for it.”

Cass County Sheriff’s Office Capt. Thomas Jacobs praised Lankowicz and others with the Cassopolis clinic for being proactive about fighting opiate abuse, and said the organization was at the “bleeding edge” of a drug problem that has yet to have many solutions on the table to solve.

“What is good for Cass County may be good for everybody,” Jacobs said. “Let’s do it right and set a good example.”

This story has been updated to amend a source error.  NILES — A new store in Niles Township is aimed... read more