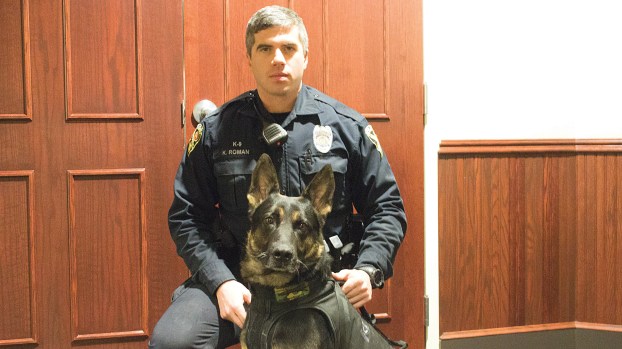 Dowagiac Police Officer Kevin Roman and his partner, Tole, pose inside city hall Monday evening. The department was recently gifted a protective vest for the German shepherd to wear while on duty. (Leader photo/TED YOAKUM)

The Dowagiac Police Department’s K-9, Tole, has recently begun wearing a sleek black vest, sporting the words “POLICE” in white on the sides, with several belts holding it in place, while on patrol with his handler, Officer Kevin Roman. The new harness matches closely with the dark-colored uniforms worn by his human counterparts in the department, making him and his partner look even more like a formidable duo that is ready to take a bite of Dowagiac’s criminal element.

“This is his new work attire,” Roman said about Tole’s vest. “It’s what he wears everyday while on duty.”

The garment is far more than just a fashion statement, though. The vest will also provide invaluable protection to Tole while out in the field, standing in between the dog and damage from bullets, knives or small explosions, Roman said.

Thanks to generosity of a former Navy SEAL K-9 handler and others in the Dowagiac community, however, Tole is now a little safer from the dangers presented by the unpredictable world of law enforcement.

Spike’s K-9 Fund, a nonprofit operated by retired SEAL turned motivational speaker James Hatch, began arranging for the purchase of the custom-fit vest for Tole after meeting with the K-9 and Roman when Hatch spoke at Southwestern Michigan College in September. The special forces member — who lost his own K-9, Spike, while serving in Iraq in 2006 — agreed to donate his speaking fee from the college to purchase the protective garment. Over the next several weeks, people from the Dowagiac community, including members of Roman’s family, chipped in the rest of the amount to make the purchase possible, the officer said.

After sending in photos of Tole wearing a mockup of the vest to Canadian K-9 equipment manufacturer K9 Storm, the company went to work producing the armor for the police dog. The finished vest arrived shortly before Thanksgiving, Roman said.

Roman likened Tole’s new gear to the bullet proof vests officers wear while responding to dangerous situations. As the vest only weighs around 3 pounds, though, it is light enough for Tole to still remain limber and agile while suited.

While Roman and the rest the department will still do everything possible to keep Tole out of danger, the vest will at least offer an additional layer of protection in situations like tracks or searches, where sometimes the dog will run way ahead of his partner, Roman said.

“In spite of all his training, he is still just a dog,” he said. “He doesn’t understand what bullets are, or what knives are, like we do. We are bringing him into a dangerous world. The least we can do is protect him.”

Roman said he and others in the department are grateful that Hatch and others stepped up to help protect Tole. Their actions give him an extra boost in morale while he and his partner are out on patrol protecting the community.

MISHAWAKA — Niles and Edwardsburg will compete in the Henry Wilk Classic, better known as the Penn Super Duals, on... read more