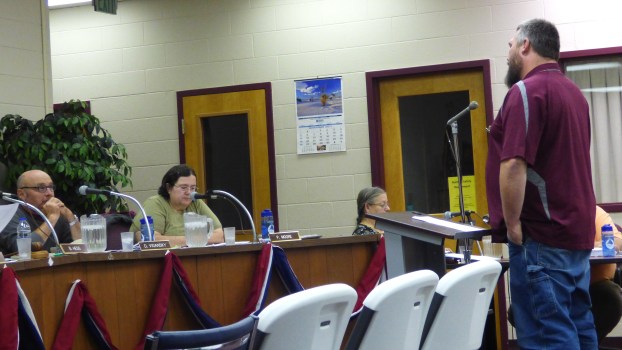 Scott Desenberg speaks to the commissioners Dan Vigansky and Patricia Moore to the left.(Leader contributor/DEBRA HAIGHT)

BUCHANAN – The location of the city of Buchanan’s proposed dog park is once again being called into question by a Buchanan city commissioner.

Commissioners voted in October, with Vigansky dissenting, to change the location of the proposed park from the Victory Street area to the former Renhack Field in the McCoy Creek Recreation Area.

Fundraising efforts are continuing to get enough money to establish the dog park.

On Monday, Vigansky raised his concerns again after Water Superintendent Scott Desenberg said he opposed locating the dog park there as it is so close to three of the city’s water wells.

“I’ve made my opinion clear. I don’t think it’s a good idea,” Desenberg said when asked by Vigansky about the dog park location.

Desenberg said he does not think a new water well should be drilled in the area where three wells already exist not only because of the new dog park, but also because he thinks the city would be better served by locating a new well in a different location.

“If those wells were contaminated, the new one wouldn’t be,” he said.

City Manager William Marx took a different view on the dog park. He reported that he had contacted Michigan Department of Environmental Quality officials, who said there would not be a problem with locating the dog park near the water wells as long as the wells are 200 or more feet away. He said the closest water wells are 500 feet away.

Vigansky was skeptical of the DEQ’s approval of the dog park location.

“The DEQ were the ones overseeing Flint. That’s not a good recommendation. That’s not credible at all,” he said.

Vigansky tried unsuccessfully to get fellow commissioners to put a hold on the dog park project. Commissioners Patricia Moore and Dale Toerne said it was not on the agenda, and could not be brought up.

Mayor Brenda Hess said she would like more time to look into the issue, and suggested it be put on a future commission meeting agenda.

The new water well is one of the remaining items to be done on the city’s capital improvement plan, approved in January 2016. The city has already completed work on two water towers, and replaced a majority of 1,250 water meters.

Also on Monday, commissioners approved an updated capital improvement plan for 2018 that includes the new water well and the replacement of water mains in a northwest side neighborhood in the next five years. The new well is expected to cost $500,000, while the water main replacement in the Paden Park neighborhood would cost $700,000.

The new plan also includes long-term projects to be done over the next 20 years. Those include upgrading and replacing 30 older fire hydrants at a cost of $6,000 each, and replacing 3 and 4-inch water mains that are 90 to 100 years old, at a cost of more than $3 million.

Desenberg said the city is waiting for the results of the study being done with funds from a Stormwater Asset Management and Wastewater grant to see what work is done first.

“We want to see where the most need is so we can get the most bang for the buck and where we can spend our money the smartest,” he said.

The water system improvements were not the only infrastructure needs discussed Monday. Marx reported that the city has received information from two companies on the upcoming sewage treatment plant upgrades. The commission then set a workshop session for 6 p.m. Monday, Dec. 18, to look over the companies’ information.

Marx said after the meeting that the sewage treatment plant upgrades are expected to cost $7.4 million.

Plans now call for the work to start in 2020 and be done in three years. He said the city has been setting aside money for the project the last few years by raising rates, officials may also apply for grants to get more money to fund it.

In other infrastructure action, the commission accepted a new Wellhead Protection Program Grant to pay for wellhead protection education efforts. The city is getting $3,675 and matching it with another $3,675 in local funds. The grant will pay for everything from placemats given to local restaurants to displays for local schools.

The commission’s Dec. 26 meeting was canceled on a 4-1 vote, with Vigansky voting “no.”

BUCHANAN — When walking into Wesner Automotive in Buchanan, one will be met by a sight of dozens, if not... read more