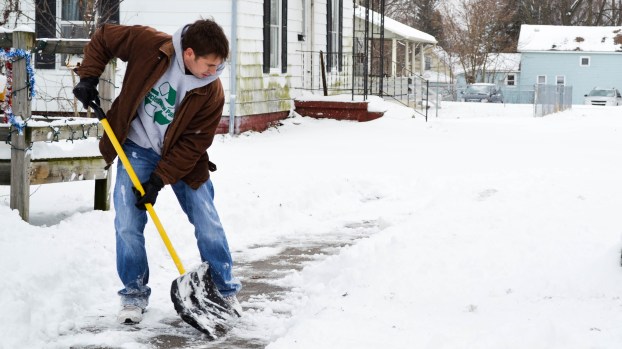 Over the past several days, lake-effect snow pelted communities across Berrien and Cass counties, propelled by wind gusts as fast as 40 mph, which caused whiteout conditions in some portions of the area. With temperatures falling well below freezing, several local roadways became slick with ice as well.

After the season’s first major snowfall last Thursday — which resulted in 21 traffic crashes between 6 a.m. and noon that day in Cass County, according to officials with the sheriff’s office — conditions intensified Tuesday, as the region was blasted with bands of heavy lake-effect snow throughout the morning and early afternoon. The severe conditions promoted the National Weather Service to upgrade the winter storm watch it issued Monday afternoon to a winter storm warning Tuesday morning, with meteorologists advising that as much as 5 inches of snow could accumulate in portions of southwest Michigan and northern Indiana.

While as of Tuesday afternoon the warning was set to expire early Wednesday morning, it appears the region is not out of the chilly woods just yet. Sporadic snow showers are expected to hit the area through Sunday, with a clipper system bringing light snow Wednesday into Thursday morning, and lake effect snow developing Friday and possibly into the weekend.

With the ugly side of the season finally rearing its head, Cass County Emergency Manager David Smith is offering several tips to residents in order to prepare for winter’s worse.

In the event of emergency winter weather, motorists should first ask themselves a simple question: “do I even need to be on the road today?”

“If it’s not necessary for you to have to travel, then don’t,” Smith said. “You never know what kind of conditions you will be running into on the road.”

Should people need to drive during heavy snowfall events, they should first check out local weather reports to see what adverse weather awaits them during their trip. It is important for motorists to not just learn about conditions near their homes, but also near their destination, as there could be a travel advisory in place in one area but not for another.

For example, people who commute to communities in northern Indiana should monitor conditions near their workplace, Smith said.

Before hitting the road, motorists should also have supplies on hand to help in the event they get stuck or stranded. These items include a first-aid kit that includes basic medical supplies like bandages and gauze pads; a flashlight; water bottles; a blanket; a snow shovel; jumper cables; and a bag of cat litter, which can help provide traction in the event that the driver’s vehicle gets stuck in a snowbank.

Drivers should also make sure their vehicle is roadworthy. They should make sure that the vehicle has a properly functioning windshield wiper system, has tires without a lot of wear on them and is mechanically sound, Smith said.

While driving, people should always drive slower than usual, and pay close attention to conditions. Motorists should stick to main roadways, such as state or interstate highways, whenever possible, as those roads are cleared more often by plow trucks compared to county or local roads, Smith said.

Those who choose to stay home during inclement winter weather should also be prepared, in case they are snowed in or their dwelling loses power.

Like their vehicles, people should have some basic supplies on hand to help them make it through an emergency.

In addition to things such as bottled water, a first aid kit, flashlight and blankets, people should make sure to have a three- to four-day food supply stocked inside their home at all times. People should make sure that their emergency food items are able to be prepared and eaten without electricity. Examples of these types of food include cereal or peanut butter and jelly, Smith said.

People with health conditions that require medication should try to have enough pills stored to make it several days without a refill, Smith said. Pet owners should also make sure to have enough food and other supplies on hand to care for their animals.

To keep homes warm, residents should close doors to rooms they do not plan to occupy. They should also refrain from using unsafe heating sources, such as generators or charcoal grills, to heat homes inside an enclosed space, as they produce a potentially lethal amount of carbon monoxide.

In addition to making sure one’s own dwelling is prepared, Smith said people should also do their part to help others, especially the elderly or those dealing with handicaps.

“In the event of bad weather, you should ask your neighbors if they are prepared,” Smith said. “It’s a neighborly thing to do, to ask if they need help and, if so, to make sure they receive it.”

One of the most important things people can do during the winter is to make sure they continue to monitor the weather, so that they can always stay on top of things. In addition to following local media, Smith said people can visit the Cass County Sheriff’s Office Facebook to get updates on severe weather advisories.

“You should make sure you stay tuned in, stay prepared and stay informed,” Smith said.

Winter Storm Warning ends at 7 a.m. Cloudy, with a high near 25 degrees. Southwest wind between 5 to 10 mph. Snow precipitation is 70 percent likely. New snow accumulations are predicted to be between 1 to 3 inches. Snow is expected to continue into Wednesday night, mainly before 1 a.m. Night time temperature low is expected to be around 13 degrees. A north wind of five to 10 mph is anticipated.

Snow showers are 70 percent likely. Temperature high will be around 29 degrees. There is a 60 percent chance for snow Friday night. Low temperature predicted to be around 21 degrees.

Cloudy, with temperature high predicted to be around 35 degrees. There is a 30 percent chance of snow showers after 1 a.m. Night time temperature low will be around 26 degrees.

A 30 percent chance of snow showers. Temperature high around 36 degrees.