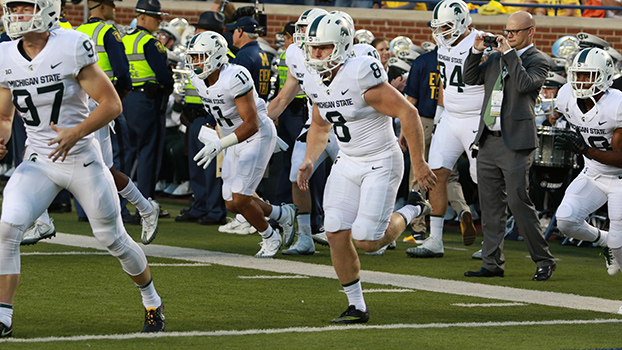 EAST LANSING — The Michigan State football team began practicing for the Holiday Bowl on Friday afternoon with a two-hour workout in full pads in the Duffy Daugherty Indoor Building.

Friday marked the first practice for the Spartans since they defeated Rutgers, 40-7, in the regular-season finale on Nov. 25. Michigan State finished No. 16 in the final College Football Playoff rankings released last Sunday, marking the third time in the four-year CFP era that the Spartans finished in the final rankings (No. 8 in 2014, No. 3 in 2015).

“You come back out here today, get your feet wet again, run around and hit people,” said sophomore linebacker Joe Bachie. “This bowl game for a lot of the young guys — the true sophomores, the redshirt freshmen, the freshmen — you know it’s exciting to experience something like this, especially in a great place like San Diego.”

The Spartans lead the all-time series against the Cougars, 5-2, but the two programs have not faced each other since 1977 and have never met in a bowl game.

Under sixth-year head coach Mike Leach, Washington State has ranked in the top five of the Football Bowl Subdivision for passing offense five consecutive years, including No. 2 this season, averaging 374.8 yards per game.

“I think it’s two very opposite end of the spectrum-type of offenses,” said sophomore quarterback Brian Lewerke. “Obviously they throw the ball a lot and we’re kind of mixed. If they start putting a lot of points on the board — we have confidence in our defense to not let that happen — but if it does, we’re ready to throw the ball.”

Michigan State will also practice on Saturday before taking a break for final exams next week.

“I’ll have a ton of people there since it’s a West Coast game, which is fun for me,” Lewerke said. “I’ve got a lot of people coming out. It’ll be a short drive and flight home after the game so I’m pretty excited about that.”

Buchanan edges Bobcats at the buzzer; Niles improves to 2-0

BUCHANAN — It was a roller coaster of emotions for the Buchanan and Brandywine boys basketball teams as they renewed... read more