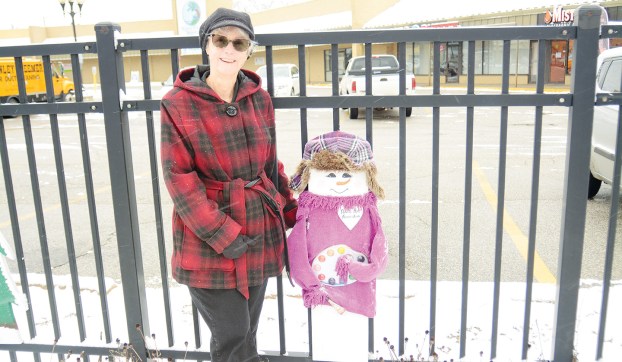 NILES — If it seems like the downtown Christmas lights adorning every tree and lamp post are extra bright this year, that is because they are. The lights were replaced thanks to some ingenuity from the Niles Art Association and Niles DDA Main Street.

“They [the lights] are pretty. They have that warm glow,” said Lisa Croteau, the program manager for the Niles DDA Main Street.

Croteau was looking for a way to raise funds for new decorations last holiday season, when Sandy Whitmyer, the Niles Art Association president, came up with an idea. Whitmyer, a longtime local artist, decided to craft snowmen from wooden planks and have people sponsor the art to contribute to the cause.

“I wanted to do something that was not just Christmas themed,” Whitmyer said.

The snowmen could be sponsored for $10 to $15 depending on their size. More than 50 snowmen were requested by local business owners and Niles residents. Volunteers helped Whitmyer craft the snowmen from wooden planks, exterior paint and donated or handmade winter clothing. The project raised about $360, after expenses, which combined with a Go Fund Me donation, helped to replace Christmas lights and other decorations to spruce up the downtown for the winter holiday.

The new LED lights are more energy efficient than the formerly used incandescent lights. The money also helped to fund a few other decorations such as wreaths, which are decorated with ribbons made by Phil Hurlbutt, the owner of the Flower Cart.

While the fundraiser is over, the snowmen have appeared in the downtown for their second-year debut. Like Whitmyer intended, each snowman possesses its own unique character. Those passing through the downtown can observe musician snowmen, donning tuxedoes and holding musical instruments, to a snowman holding an easel and paint brush.

New to the display this year, Whitmyer added two hand painted signs. One of which reads, “Snowmen fall from the sky unassembled.”

This year, the snowmen were also zip tied to the bases of trees to eliminate the risk of falling over. Last year, this was one of the issues Whitmyer said needed to be addressed.

Whitmyer is still getting positive feedback from the project.

“I think they enjoy them,” Whitmyer said. “All the community can see the snowmen on the corner and the trees and it makes them smile. What more could you ask for?”

Whitmyer also said she hopes those who see the snowmen appreciate all the hard work and craftsmanship that went into making them.

Whitmyer said the snowmen first started being made in August 2016. Some volunteers even hand made some of the winter hats that the snowmen wear.

Together, the decorations seem to complement one another, especially against the most recent snow fall, Croteau said.

“I think they [the snowmen] look so cute with the lights on the trees,” Croteau said.

Last year, Whitmyer also created a 5-foot-tall snowman mural. The mural will also make its return again this year in the weeks to come.

NILES — With the aim to provide fellowship and food to those who need it on the Christmas holiday, Wesley... read more