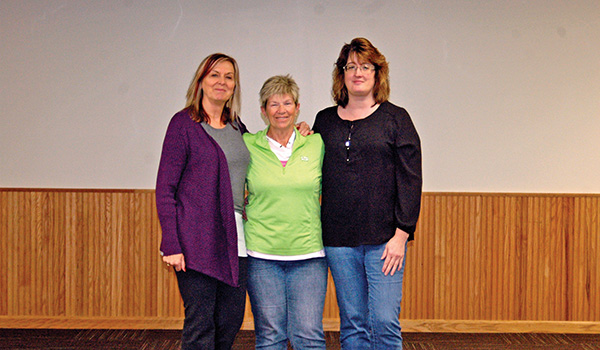 EDWARDSBURG — The women of Edwardsburg Zumba meet at the American Legion three times a week with two goals in mind: getting fit and giving back to the community.

The club is continuing that tradition this month by donating proceeds and donations to Elkhart, Indiana-based charity Second Chance Small Dog Rescue. The group is also sponsoring a local veteran. The group is asking anyone interested to attend their meeting this Thursday to bring donations in the form of dog items, such as food, toys or blankets, to help them give more to the charity.

The dance-based exercise group was started in 2007 by organizers Patty Strickland, Reenie Plummer and MerrieAnn Papczynski. The tradition of giving goes back almost as far, with the group donating to a local cause or family two to three times a year.

“The girls [who came] loved it, and we started making so much money that automatically, whatever was left at the end of the month, we gave back to the community,” Strickland said. “When we first started, it was more about the exercise than the money, and things just kind of evolved from there.”

Over the years the group has donated to numerous causes including Cass County Cancer Service, Relay for Life, Vets Helping Vets and others. Second Chance Small Dog Rescue was chosen because it is a cause near and dear to the heart of a Zumba regular. The charity fosters and takes care of dogs in need.

“It’s a great organization,” Papczynski said. “They use money for a lot of things like vaccinations and things like that, so if we can get people to bring in [physical] donations, that would really help them.”

In addition to helping various causes, Edwardsburg Zumba always sponsors a veteran family during the holiday season. Most years, they sponsor one or two local families.

This year, they are sponsoring a single, elderly veteran. They have bought him boots, socks, pants and other warm weather clothing.

Strickland said that Edwardsburg Zumba gives back to the American Legion, which rents the group space for their classes for free.

“We wanted to do something to give back to them for all they do for us,” Strickland said. “We’ve been doing Zumba here for 10 years now, and they advertise for us and are very welcoming to us. If it wasn’t for the legion giving us this space for free, we wouldn’t be able to do this.”

Strickland added that members of the American Legion are very supportive of the Zumba group and its charitable efforts, saying that often members donate to the causes.

Whether the group is supporting local veterans or local charities, Strickland said she is grateful for the community of Edwardsburg’s support and that she hopes the group will be able to give back for years to come.

“We are here to get fit and make the community a bit of a better place to live,” she said.

Edwardsburg Zumba meets at 5:30 p.m. Tuesdays and Thursdays, and at 8 a.m. Saturdays at the Edwardsburg American Legion. For more information, visit them on Facebook.