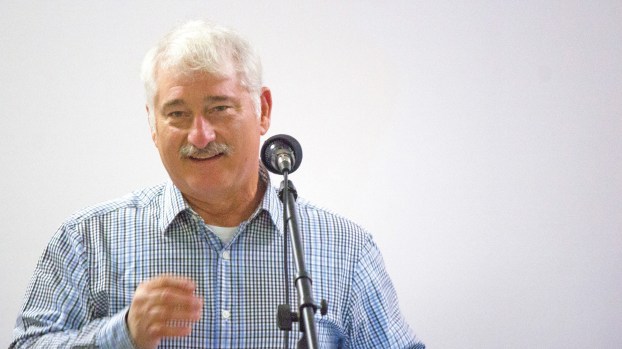 VANDALIA — When European settlers first arrived on the fertile soils of the New World centuries ago, the word “conservation” was not exactly at the forefront of their minds.

For generations, American farmers used the same methods of tilling and land management employed by their ancestors half a world away, in spite of the massive differences in dirt, topography and weather patterns between the two continents. As a result, the country began to suffer from massive issues with soil erosion, culminating in the infamous Dust Bowl — a series of dirt storms that swept across the U.S. Southern Plains during the 1930s.

The gusts were large enough that cattle were actually able to escape their pens, as so much dirt had accumulated that the level of the soil had risen above the height of the fencing. The storms caused so much static electricity in the atmosphere that people would be knocked to the ground when trying to grab a metal object, such as a plow.

“People actually died [from the storms],” said Steven Law, an expert on the history of soil conservation. “Young, healthy people died from dust pneumonia. They inhaled so much dust that their lungs were full of mud, and they died from it. It was that bad.”

Recognizing soil erosion as the menace that it was, Hugh Hammond Bennett, the director of the Soil Erosion Service in the U.S. Department of the Interior, made the creation of a national effort to combat the issue his mission in life. In 1935, he helped push for the passage of the Soil Conservation Act, which paved the way for the creation of a Soil Conservation Service at the U.S. Department of Agriculture.

Soon, across the U.S., counties around the country began creating conservation districts, entities that empowered local farmers to take action to prevent soil erosion in their backyards. Among those districts born in the shadow of the Dust Bowl was the Cass County Conservation District. County residents voted to create the organization on Sept. 17, 1943, and members set out to help ensure that an ecological disaster like the Dust Bowl would never emerge in southwest Michigan.

Nearly 75 years later, the conservation district remains a force for environmental protection in the local area.

On Tuesday, leaders of the Cass County Conservation District hosted the organization’s annual meeting, which took place inside the Vandalia Community Center. More than 60 people attended the banquet, where members recognized a handful of county residents who have went above and beyond to maintain the beauty and bounty of Cass County’s farmlands and natural resources.

In addition to the recognition, the audience listened to a presentation by Law about the history of conservation districts in the U.S. and the state of Michigan.

Among those honored Tuesday was the late Gertrude “Gertie” Temple, as the organization’s Conservationist of the Year.

Nominated by Cass County Drain Commissioner Bruce Campbell, Temple — who died earlier this year on July 31 — was recognized for her passion for preserving the waters of Birch Lake, located just outside Vandalia, as well as for protecting the wetlands of Porter Township.

“The definition of stewardship is the job of taking care of something, such as property,” Campbell said, in a tribute he had written for Temple. “Gert Temple fits that definition more than anyone I have been associated with over the years. Her dedication to protect the environment and habitat is unparalleled.

“What set her apart from others was the passion she exhibited with her efforts over the years. This honor could not have been bestowed on a more deserving person.”

Accepting the award on Temple’s behalf were the woman’s daughters, Jan Temple and Gerry Ann Temple, as well as her grandson, Brett Sortal.

Bryce Placher, of Buchanan, is a 14-year-old student who volunteers at the Niles Scream Park through his Boy Scout troop.... read more