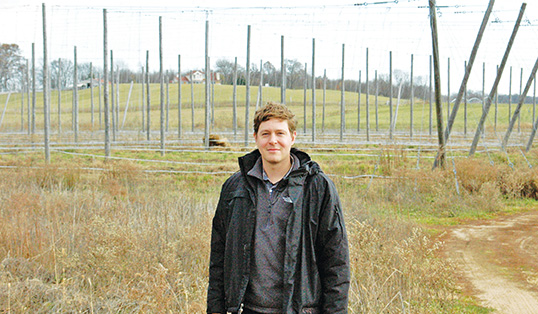 Farm to table brewery looking to open in Buchanan

BUCHANAN­­ — The sun is shining down on a Tuesday afternoon at Flatwater Farms, an organic hop farm in Buchanan, as Chicago native Brian Dougherty, coffee in hand, gives a tour of the grounds.

Though the land is currently bare due to the winter chill, Dougherty describes the farm the way it is during the peak months, when the grass is lush and green and the crops grow tall.

“Over there is where the hops grow. In summer, they grow to be 20, 30 feet high,” Dougherty said pointing to a large structure with wires flowing to the ground. “And there is where we can grow different crops. Right now, there are radishes in there.”

Next stop on his tour is a large, blank square of land closer to the opening of the farm’s property.

“Here,” Dougherty said proudly, “is where the brewery will go.”

Dougherty, as CEO of Buchanan Craft LLC, is planning to open a restaurant/brewery on the property of Flatwater Farms, through a long-term land lease. The brewery, which will be called River Saint Joe, was recently given the green light by Buchanan officials. Hoping to break ground this winter, Dougherty plans to open the brewery in late 2018 or 2019.

The plan to open River Saint Joe has been in place for nearly three years, when Dougherty teamed up with Fran Tuite, the owner of Flatwater Farms and a longtime friend of his wife’s. Now, Dougherty said he is ecstatic to finally get moving on his dream. Once the brewery is opened, the team hopes to eventually expand by adding an event space for things like weddings and add an outdoor space that could be used for an ice rink in the wintertime and a beer garden in the summer months. Additionally, they want to add an educational aspect by offering classes on organic farming and cooking, among other topics.

“We kind of want this to be a community space, not just a place to drink beer,” Dougherty said.

The brewery will have a farm to table aspect, as the hops and other crops produced on the organic farm will be used in the beer and food served at River Saint Joe.

“That’s the really cool thing about having the brewery on a farm site,” Dougherty said. “If we wanted to, say, make a blueberry beer, we could grow blueberries. Right now, we could use those radishes I showed you earlier to make some sort of dish for the restaurant. The possibilities are almost endless. The goal is to have as much as possible grown on the farm. We will let the farm kind of guide the menu.”

Dougherty believes that the farm to table aspect of the brewery, as well as the fact that it is organic, will set it apart from the many other breweries in the Michiana area and draw in customers.

“Organic is not unique for beer, but it is rare. There are probably only a handful of organic breweries in the country, but it is growing,” Dougherty said. “And the farm to table thing is kind of unusual in beer to have everything going on onsite. You see that more with wineries. We really want to bring that agricultural experience to beer.”

Tuite, as owner of the farm and co-manager of Buchanan Craft LLC, will take a less hands on role in the brewery than Dougherty, though she said she will maintain creative oversight of the business.

“When Brian came to me about this project, I was sold on it pretty quickly,” she said. “I fully believe in the brewery and the fact that it is organic and farm to table. So long as we remain true to our vision, I believe we will be successful.”

Though both Tuite and Dougherty currently reside full-time in Chicago, with Dougherty saying he eventually plans to move down to Buchanan, they said they are excited to start their business in Buchanan and cannot wait to break ground on the brewery.

“I originally [bought a second home in Buchanan] because I wanted to be near the river, but I just fell in love with the area along the way,” Tuite said. “I believe in the revitalization of Buchanan and growing the economy of Buchanan, which I hope our restaurant will be able can be part of.”

Dougherty added that though the process to get everything in place for River Saint Joe has been a long one, Buchanan officials made the process as easy as they could.

“The city is enormously business friendly,” he said. “They have made us feel welcome the same way we want to make the people of Buchanan feel welcome in our brewery.”