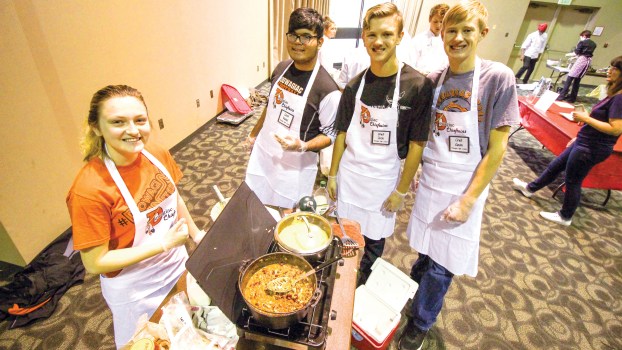 The team Big Bean Theory, of Kalamazoo RESA’s Culinary Arts Program, took first place. According to cook-off judge and LMC chef instructor Luis Amado, the winning team’s chili had the right texture, was not too spicy and had good use of flavorings and herbs.

“This team nailed it,” Amado said.

Culinary instructor Kharen Shelton brought Big Bean Theory to the event, as well as seven other teams, and has been to almost all of the past cook-offs.

“[The event] gives students a chance to work under pressure, meet students from other schools and to have fun while they’re working,” Shelton said. “That’s what career tech is all about — finding a career that you have fun with, that you love.”

The students had one hour and portable butane burners to prepare their original chili and cornbread recipes from scratch.

The dishes were evaluated by a panel of judges including Amado; Shawn Johnson, LMC hospitality and culinary student; Christine Anderson and Alice Archer-Snow, of LMC conference and events services; and David Barrett, LMC instructor.

Instructor Andy Kruger has been teaching healthy lifestyles and other electives at Dowagiac for 18 years, and started the culinary arts program there just this year. The students in his culinary class of 30 competed in their own chili cook-off to choose the team who would go to LMC.

Kruger does not have a culinary background, and said he was a little apprehensive about teaching the cooking class.

“I never would have imagined it, but this is my favorite class now,” he said.

He said there is a waiting list for the program, and he hopes to bring more than one team to the LMC Cook-Off next year, when the students will be able to take advantage of a brand new kitchen being built for the class.

Lake Michigan College created the event to give high school students a taste of what a hospitality career might entail. Students learn time management, teamwork, professionalism, and exercise their creativity while meeting other students from around the region.

CASSOPOLIS — A Dowagiac man with a history of assaultive behavior will spend an extended stay in a Cass County jail... read more