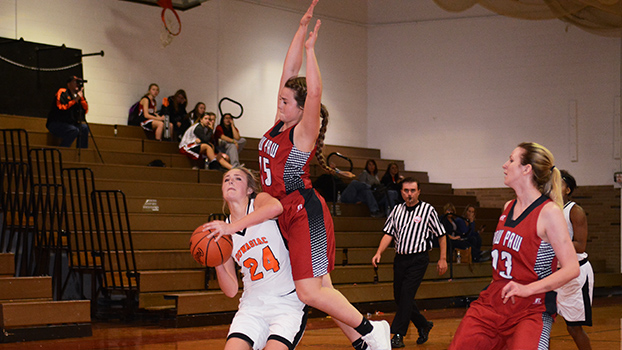 DOWAGIAC — There is more to turning around a program than just winning basketball games.

But snapping a 37-game conference losing streak in only the second game of the season will go a long way toward helping change the fortunes of the Dowagiac girls basketball program.

After letting several chances at stopping its Wolverine Conference skid slip through its fingers last season, the Chieftains seemed more determined than ever to not let that happen Friday night against visiting Paw Paw.

Two of those chances came against the Redskins during the 2016-17 season, the first under Dowagiac coach Brent Nate.

But after dropping its season opener to Brandywine the previous Tuesday, the Chieftains were focused and showed improvement from that defeat in beating Paw Paw 47-42.

There were moments when Dowagiac appeared to be headed to a similar fate as last year, but then junior Taylor Pye would grab yet another defensive rebound and the Chieftains would be back in business.

Or junior Amiyah Smith, Dowagiac’s lone returning all-conference player, would get to the basket and score.

Better yet, the Chieftains would force a turnover against Paw Paw and hold it at bay on the scoreboard.

“That is a big win for our program,” Nate said. “The girls fought. They battled back. They made a run in the fourth and we figured out a way to make it happen.”

While Dowagiac was far from stellar at the free throw line again, going just 12-of-35, it did get some big makes down the stretch when it needed them.

“Kazmere Williams made some free throws that were big in the fourth,” Nate said. “We made some stops (defensively) when we needed them. We mixed up our pressures and I think that affected them a little bit.”

Nate said that it was not just this year’s team that gets credit for the victory, but some of the players from last year that “helped build the foundation.”

It was not always pretty Friday night, but the Chieftains despite making mistakes showed some grit and desire in rallying to pull even with Paw Paw by halftime at 22-22.

Dowagiac (1-1) trailed 13-10 after one quarter, but outscored Paw Paw (0-2) 12-9 in the second quarter to send the two teams into the locker room at the intermission deadlocked.

Dowagiac continued to outplay Paw Paw in the second half, especially at the defensive end of the court.

The Chieftains pressured Paw Paw into hurried shots, turnovers and dominated the rebounding led by Pye, who unofficially finished with 22 rebounds.

“It feels amazing,” Pye said about getting the first win of the season and stopping the losing streak. “I felt like I was on my game today.”

Pye said that the team felt like it was going to be able to beat Paw Paw at halftime after rallying to tie the score.

“We knew we were going to try our hardest and we know we had it right there,” she said.

And what about watching the final two seconds tick off of the clock?

“It felt good just standing their watching them take off (down) the court knowing we were going to win,” Pye said.

“Taylor Pye was a beast,” Nate said. “I told here she played a great game. We do not win without her and those rebounds. Taylor Pye has been unbelievable the first two games. She is rebounding, playing good defense and finishing around the rim.

“She is a third-year varsity player as a junior and it is starting to show. She took some lumps when she was younger, but now the game is slowing down for her.”

Paw Paw was led by Emma Johnson’s game-high 17 points. She was the lone player to reach double figures.

Dowagiac returns to action Tuesday as it travels to Benton Harbor for a non-conference contest.

“One game at a time,” Nate said. “We go on the road for the first time Tuesday. But right now, we are tied for first place in the conference.”

Edwardsburg improves to 2-0 with rout of Sturgis