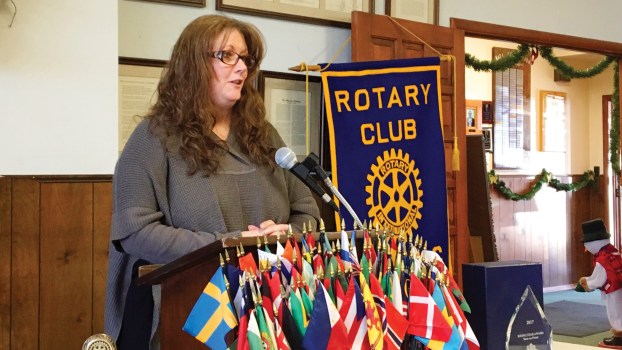 Sister Lakes’ June Nemeth, owner of downtown Dowagiac’s Yarn on Front, talks about her business and her passion for knitting during Thursday’s meeting of the Dowagiac Rotary Club. Her Front Street business recently celebrated its first anniversary. (Leader photo/TED YOAKUM)

DOWAGIAC — Sister Lakes’ June Nemeth can still remember the exact moment she decided to weave her dream of opening her own yarn shop into a reality.

It was several years ago, during her familiar drive home after finishing up her shift at the clothing store where she was working at the time, she recalled. As Nemeth made her way down Front Street downtown, she noticed a beautiful — yet empty — storefront beneath the giant blue awning of the local Masonic Lodge.

Visions of brightly colored yarn spools, fancy copper knitting needles and — most important of all — happy customers immediately began flooding her imagination as she excitedly rushed back home, Nemeth said. She did not even wait before they both made it back house to share her newly-cooked up business plan with her husband, whose vehicle she cut off as they passed by each other on the road their home is on, she said.

Over the next several years, though, Nemeth began feeling like her dream was slowly unraveling before her eyes, as several different businesses opened — and closed — inside the tiny Front Street storefront.

In spring 2016, when the location became available once again, she decided it was now or never, and worked out a deal for the space before two other interested parties could snatch it up, Nemeth said.

Seven months later, on Small Business Saturday 2016, Yarn on Front was born — much to the excitement of her fellow knitting enthusiasts, who packed the store only a few minutes after she opened the doors.

A few days removed from the one-year anniversary of her store’s opening, the local business owner talked about the success she has experienced over the past 12 months throughout her presentation to the members of the Dowagiac Rotary Club, during its meeting Thursday at the Elks Lodge. Nemeth — who arrived with her “Rising Star” trophy recently awarded to her by the Greater Dowagiac Chamber of Commerce in tow — was invited to stop by the service club meeting by Rotarians Jennifer Ray and Barbara Groner.

Nemeth and her staff offer an assortment of yarns — made from natural fibers, like cashmere and alpaca fleece — as well as yarn equipment at the store. In addition, the business hosts yarning nights every Wednesday evening, where customers are welcome to work on their knitting or crocheting projects, and enjoy some company while doing so.

“The response to those nights has been phenomenal,” Nemeth said. “People call, or email, or leave a card thanking me for our Wednesday nights. It has changed lives for some people.”

In addition to being a haven for yarn-lovers, Nemeth wants to use her business to — borrowing the slogan of another local destination, Sister Lakes Brewing Company — “foster community,” one spool at a time.

This past year, she has collected hats, gloves and scarves to donate to ACTION Ministries, to be handed out to people in need to stay warm over the winter. She and her customers also helped knit purple baby caps for South Bend’s Family & Children’s Center, she said.

With one year of experience under her belt, Nemeth said she wants to encourage younger generations to discover the joys of knitting, just as she did when she was a teenager, she said.

“I want to maybe get involved with the school system and start getting younger people into the shop to learn, so that we can help expand this craft,” she said.

DOWAGIAC — As an antiques collector and dealer, the vice president of the local school board and — most important... read more