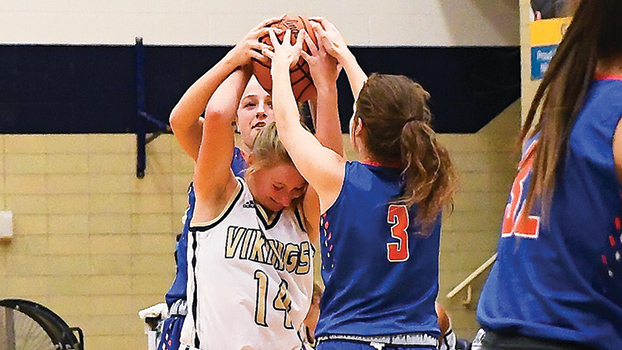 Edwardsburg used a smothering defense to defeat Niles 52-31 in the season opener for both teams Tuesday night. (Leader photo/KELLY SWEENEY)

The Eddies shutout the Vikings in the opening quarter, 9-0, and extended their lead to 29-8 by halftime.

“We got a lot of pressure at the start of the game,” Edwardsburg Coach Jon Pobuda said. “We also couldn’t finish a lot of our shots. The game for us started a little slow, but the more games we play it will start to get easier.”

“Offensively we were able to beat their trap,” she said. “We just did not make any shots and we had more turnovers in the first half then we did points.

Niles (0-1) did not score its first points of the game until there was 6:50 left in the first half on a Caitlin Daly layup off an assist from Alycia Patterson.

Edwardsburg’s Zarycki would steal the ball on four Viking possessions and increase the Eddies’ lead to 20-3 with 2:30 left in the half.

“The game really opened up for her,” Pobuda said. “She was able to get her teammates involved and she played extremely well. This type of game could happen more often this season.”

Edwardsburg lead 29-8 at the break behind Zarycki’s 18 points.

Picking up where it left off, Edwardsburg continue to increase the pressure on defense, forcing turnovers and creating chances for points.

Trailing 42-17 going into the fourth quarter, Niles started to find its game offensively.

The Vikings outscored the Eddies 14-10 in the final eight minutes and started to gain confidence on the floor.

Lajan Mitchell hit a pair of  3-pointers Patterson hit a triple to bring the Vikings within 16 points midway through the final quarter before a Zarycki 3-pointer ended the Niles comeback effort.

“She (Patterson) didn’t get as many looks as she would want,” Johnson said about Patterson’s play. “She is the core of the team. She handles the ball well. If we can get her to handle the ball and get some shots off it will be a good game for her.”

Mitchell was the only Viking in double figures with 10 points. She also have four rebounds and a pair of blocks.

Besides her game-high 35 points, Zarycki also had six steals, six rebounds, an assist and a block.

“We tried some things out today,” Pobuda said. “We went man-to-man and did different things. You could tell this was a first game for both teams in all areas of the court.”

Edwardsburg will host Sturgis in an early season Wolverine Conference contest Friday, while Niles will host Three Rivers next Tuesday in a non-conference matchup.