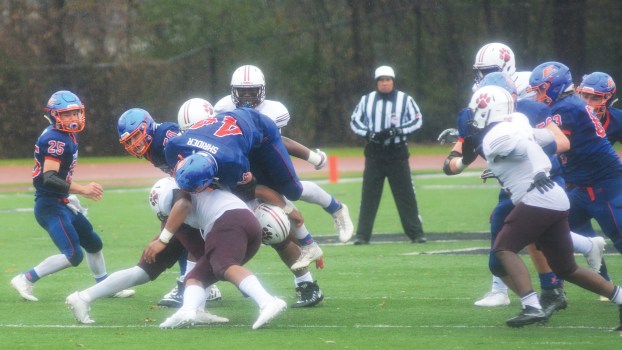 Edwardsburg’s Kyle Shrider goes up and over the River Rouge defense to pick up yardage during the Division 4 state semifinals in Jackson Saturday. (Leader photo/SCOTT NOVAK)

JACKSON — It may have taken four tries, but Edwardsburg has finally made it to Ford Field in Detroit for the MHSAA state finals.

“This is the first time in Edwardsburg history,” an elated Edwardsburg senior running back Kyle Shrider said. “It’s going to be awesome, I can’t wait.”

In a back-and-forth first half, both teams traded punches with Edwardsburg, purposely giving River Rouge short fields to work with on squib and onside kicks.

His explosiveness and 4.5 speed already has NCAA Division 1 offers from Cincinnati and Indiana.

“McKinney is dangerous with the ball,” Edwardsburg coach Kevin Bartz said. “The one time we did kick him the ball we were nervous and he still returned it to the 50-yard line.”

The Eddies answered with a nine-play, 64-yard drive that ended with Shrider scoring the first of his two touchdowns in the opening quarter from three yards out.

Shrider would finish with 22 rushes for 96 yards.

Ferguson and Shrider were not finished scoring as both added first-quarter touchdowns.

With the Panthers leading 14-12 midway through the second quarter, River Rouge would go to the air, despite the driving rain, for a touchdown.

Facing a third down-and-eight from its own 45-yard line, Ferguson heaved a pass to the left side of the field. Senior Sekou Doukoure managed to catch the ball, slip past a couple of Edwardsburg defenders and trot right into the end zone.

Not to be outdone, Edwardsburg’s Caden Goggins helped keep the game close with an eight-yard touchdown run that cut the River Rouge lead to 21-18.

After driving the length of the field and facing a first-and-goal from the 1-yard line with 20 seconds left on the clock in the first half, the Panthers failed to score as they appeared to be confused and failed to score.

With weather conditions improving in the second half, the Eddies opened the third quarter by receiving the kickoff, which it fumbled away to River Rouge its own 34-yard line.

Just as it had at the end of the first half, Edwardsburg’s defense stiffened and stopped the Panthers on four downs to get the ball back after a sack by Noah Carrico.

The turnover bug would again bite the Eddies on their next possession, but again the defense stopped River Rouge, this time forcing a punt.

With 2:28 remaining in the third quarter, Edwardsburg took its first lead of the game and never looked back.

Senior quarterback Matthew Hepler called his own number and completed a six-play, 78-yard drive with a 24-yard run.

Chase Sager would run in the 2-point conversion and the Eddies led 26-21. It was the only successful conversion play for Edwardsburg in the game.

The Eddies would force another three-and-out.

Four plays later Sager would punch it in from 23 yards out. Sager would finish with 15 rushes for 93 yards and the touchdown.

Edwardsburg’s defense stepped up once again on the ensuing River Rouge drive as Goggins intercept a Ferguson pass.

The Eddies salted the game away with a drive for the ages.

Even though it did not add points Edwardsburg used up so much time that River Rouge had to march 99 yards to get a score and then another with 1:35 left in the game.

How dominant was Edwardsburg’s second-half defense? The Eddies allowed the Panthers just 59 yards in the final 24 minutes.

Offensively, the Eddies had 30 first downs compared to River Rouge’s nine. The Eddies also outgained the Panthers 435 to 267.

Edwardsburg used eight different running backs and dominated the trenches throughout the entire game as it ran the ball 73 times.

“We will take Sunday off,” Bartz said. “There will be a quick turnaround on Monday and a lot of work to do since we play on Friday night. I am just so happy for these kids. For years they have put work into this program and it has finally paid off.”

Madison Schau is a senior at Buchanan High School. What has been one of your greatest accomplishments as an athlete?... read more