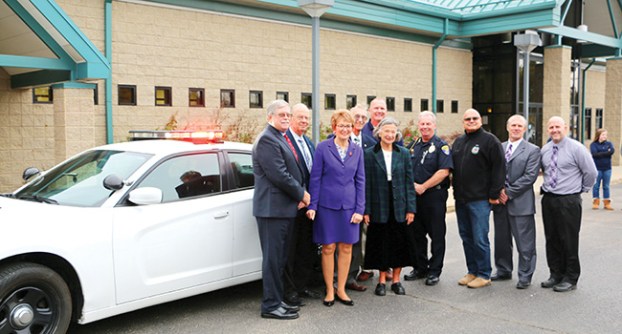 Officials with the Pokagon Band and Van Buren County Intermediate School District pose next to a squad car the tribe’s police department is donating to the educational program. (Submitted photo)

“The Pokagon Band is committed to being good neighbors by improving public safety,” said Chairman John P. Warren. “Our tribal police are cross deputized with Van Buren County Sheriff’s Department, and we are proud to help train the next generation of law enforcement officers.”

Van Buren County School’s Law Enforcement Program consists of approximately 50 students from schools in Berrien, Cass and Van Buren counties. The program is for students interested in a career in the criminal justice field.

The contribution of a patrol car by the Pokagon Tribal Police provides these students with a valuable tool, said Matt Whitman, program instructor and retired Michigan State trooper.

“Part of getting the students career ready is by providing them with hands-on activities that represent real-life situations,” Whitman said. “We at the technology center thank the Pokagon Tribal Police for such a wonderful donation.”

“The students will gain knowledge on how to safely conduct traffic stops and the proper positioning of the patrol car in various situations,” said Pokagon Tribal Police Chief William Lux. “Students will benefit from hours of real life experience by having the patrol car.”

The Pokagon Tribal Police Department consists of 50 law enforcement officers who are cross-deputized in Berrien, Cass and Van Buren counties, and in St. Joseph County, Indiana. Officers are federally, state and tribally trained, and operate out of stations in Dowagiac, New Buffalo, Hartford and South Bend.

The Pokagon Band of Potawatomi Indians’ sovereignty was reaffirmed under legislation signed into law by President Clinton in September 1994.

Its main administrative offices are located in Dowagiac, with a satellite office in South Bend. In 2007, it opened Four Winds Casino Resort in New Buffalo, followed by Four Winds Hartford in 2011 and Four Winds Dowagiac in 2013. Four Winds South Bend will open in early 2018.

It owns and operates a variety of business via Mno-Bmadsen, the tribe’s nongaming investment enterprise.