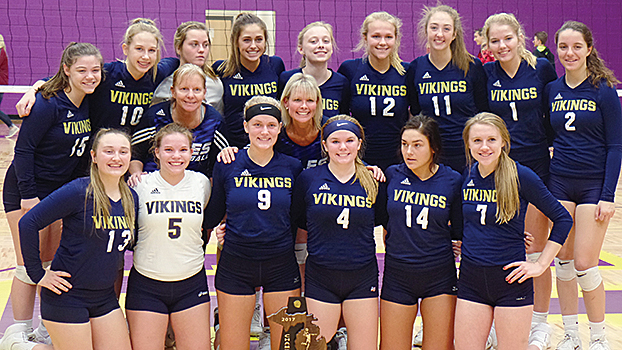 SOUTH HAVEN — For the first time in school history, the Niles volleyball hoisted the Class B district volleyball championship trophy above their head.

For Niles coach Jenny Nate, the Vikings had been preparing for that moment all season long.

“We don’t play a lot of Class B schools throughout the season,” Nate said. “Since we play in the SMAC, most of our schools are Class A and it has helped us in dominating tonight’s game.”

Niles, led by seniors Carly Barton and Bella Rasler, junior Abbigail Harpenau, and sophomores  Nikki Nate and Taylor Bailey, used its height to control the net from the beginning and never looked back.

“We are small and we are also young,” said Buchanan Coach Shelly Bender. “Our hitter and setter are both freshmen, and this tournament will help build our program.”

The Vikings opened up play in the first set and led 5-2 before Buchanan senior Madison Schau blocked Rasler to get the score within one. Not soon after the Vikings started to gain momentum, and Bender called a timeout with her team down 17-13.

Unfortunately, the Vikings did not slow down and scored five more points to increase the lead 22-14.  After a side out and another point, Harpenau earned the set point for Niles on a block.

The second set did not go any better for the Bucks.

Down 7-3 early, Bender called a time out to attempt to slow the Vikings’ momentum. It did not work, and, when Barton recorded a kill, the lead reached 16-6 and she was forced to call another time out.

Niles finished off Buchanan with a couple of kills by Bailey and a pair of aces from Peyton Cavanaugh.

“We want to dominate every opponent,” Nate said. “Not just today, but every opponent. We have continued to work from the beginning. The girls have watched film and noticed tendencies.”

Niles jumped out to another lead in the third set on five consecutive kills — three from Rasler and a pair from Harpenau.

Rasler added another five kills in the set, along with two aces as the Vikings built a 23-10 score before finishing off the Bucks for a spot in Tuesday’s Class B regional semifinals in Allegan.

Bailey and Nate added to the kills in the third set and continued to add to the offensive spark throughout the evening’s match.

“The sophomores trust each other,” Nate said. “It’s good for them to work with the seniors.”

Niles (39-8-4) will take on Hamilton in the second semifinal at Allegan High School, while Edwardsburg will face Wayland Union in the first semifinal at 5:30 p.m.

Wayland Union defeated Plainwell 3-0 to advance to the regional semifinals.