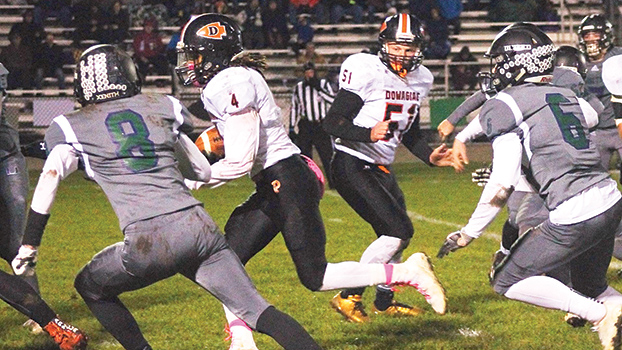 Dowagiac’s Jamin Hunt (4) picks up yardage against Kalamazoo United in the Titans’ 21-18 victory over the Chieftains in the opening round of the Division 5 playoffs. (Leader photo/CAITLON PAULEY)

KALAMAZOO — Breaking away from the traditional Wolverine Conference play, Dowagiac traveled east to face Kalamazoo United in the opening round of the MHSAA Division 5 playoffs Friday night.

The trip was not a favorable one for the Chieftains, who were eliminated by the Titans 21-18 at Mayor’s Riverfront Park.

Kalamazoo United is a mixture of Kalamazoo Hackett Catholic Prep and Kalamazoo Christian schools. The team was formed in 2014 due to low numbers.

The Chieftains (6-4) won their final four games of the regular season over Sturgis, Otsego, South Haven and Paw Paw for the second year in a row to receive automatic bid for the state tournament. This was the 11th time in the last 13 seasons Dowagiac has qualified for the playoffs.

“The team is pretty excited,” Dowagiac coach Mike Stanger said earlier in the week. “It is something you never want to take for granted. Only 256 out of 585 schools qualify. It is fun for the guys watching our team called on the selection show.”

United, a spread offense team, came right out of the gate with a 33-yard pass and a 34-yard touchdown pass to grab the 7-0 lead on Dowagiac just 25 seconds into the game.

Looking to answer on its first possession, Dowagiac went 33 yards on eight plays before pinning a punt inside the Titan’s 1-yard line.

Both teams traded possessions two more times before Dowagiac was able to find the end zone on a 20-yard Jamin Hunt run.

Feeling the tempo the offense created, the Dowagiac defense forced a three-and-out and received the ball on its own 33-yard line.

The Titans quickly to silence the Dowagiac crowd and punched it in with a two-yard run as time expired in the first-half, take a 14-12 lead into halftime.

Following a Dowagiac three-and-out to start the third quarter, the Titans added another touchdown on a 38-yard pass to open up a 21-12 lead.

The Chieftains went 63 yards in 13 plays for the answer on Murphy’s second touchdown of the game from one yard out.

A blocked punt to start the fourth quarter brought new life into the Chieftains, but ended up going backwards and was forced to punt the ball away.

After forcing the fifth United punt of the night, the Chieftains used a healthy mixture of run and pass plays to get down to the Titan’s 32-yard line.

However, four straight incompletions from Dudley turned the ball over on downs to the hosts with just over two minutes to go in the game.

With only one timeout remaining, the Chieftain defense knew they needed some key stops.

A tackle for loss and a questionable play call by United, which threw an incomplete pass and gave Dowagiac an extra stoppage of the clock that they desperately needed.

Unable to get the first down to finish off the game, the Titans punted the ball away.

Dowagiac would have to go 75 yards to score the winning touchdown and the Chieftains had just 49 seconds remaining.

A blown pass coverage by the Titans allowed Dudley to connecting with Zech Huston on a 40-yard pass to the United 35-yard line with 25 seconds remaining.

A quick spike of the ball gave the Chieftains time to reset. But on the next play the Titans intercepted Dudley’s pass the ball sealed their victory.