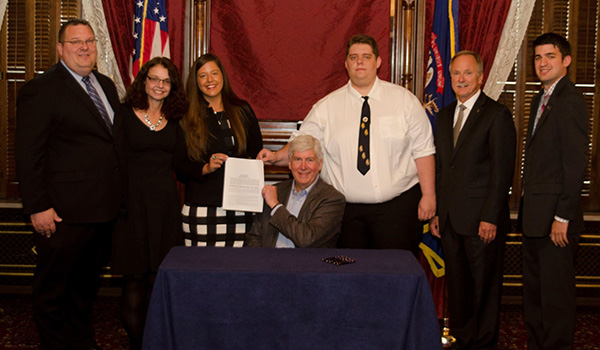 LANSING, Mich. – Heightened penalties are now in place for illegally importing deer, elk and moose carcasses to Michigan from another state or province under legislation signed today by Gov. Rick Snyder. This is the final bill sponsored by the late state Rep. John Kivela, who passed away earlier this year. Gov. Snyder was joined today by Kivela’s family for a special bill signing ceremony.

“John Kivela was a great friend and tremendous partner in our work to reinvent Michigan, and it’s an honor to be joined today by his family to sign his final bill into law,” Snyder said. “This legislation is symbolic of John’s memory and legacy of service to the Upper Peninsula and our entire state.

House Bill 4424, sponsored by the late state Rep. John Kivela, provides specific penalties for illegally importing a full carcass or specified parts of a carcass of deer, elk or moose from another state or province. Increased penalties include up to 90 days in prison or fines ranging from $500.00 minimum or $2,000.00 maximum, or both. It is now Public Act 124 of 2017.

For more information on this and other legislation, visit legislature.mi.gov.

Students at every high school in Michigan now have the opportunity to help make their fellow teens better, safer drivers... read more