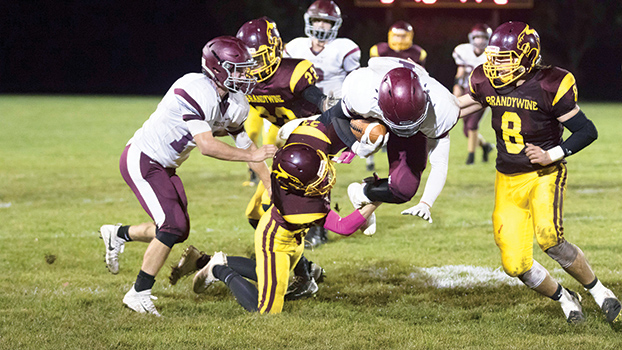 NILES — The Brandywine defense picked senior night and a home game against arch rival Buchanan to have its best performance of the season, holding off the Bucks 22-20 in a BCS Athletic Conference contest Friday night.

“Our defense did it for us,” Brandywine coach Mike Nate said. “It was the best defensive game we played all year. My hat goes off to defensive coordinator Howard Covyeou and our defense because without them we probably don’t win tonight.”

Brandywine’s defense had two sacks, forced three turnovers and held Buchanan under 300 yards of total offense, despite giving up a 96-yard touchdown run.

The Bobcats defense quite possibly made the two biggest plays of the game — one near the end of each half.

The first play came with the Bucks leading 12-8 and just under a minute left in the half, facing a fourth and one. The Bobcats stepped up and stuffed Buchanan just inches short of the line to gain.

The Brandywine offense took possession and only needed three plays to go 45 yards, capped off by a 13-yard touchdown pass from Corbin Eckenberger to Jordan Abrams. The 2-point conversion pass to Shane Brown gave the home team a 16-12 halftime lead.

The second play came after the Bucks had just gotten the ball back with two minutes remaining in the game and needing a score to take the lead.

After moving the ball a little, Eckenberger intercepted a pass by Buchanan’s Brandon Rogers and the Bobcats were able to take a knee and run out the clock for the victory.

“We had multiple opportunities in the end,” Buchanan coach Orville Thomas said. “We worked hard right up to the last minute, the boys didn’t quit and that’s what I’m most proud of.”

Brandywine (4-4) will travel to Bridgman Friday night to face the Bees for the second time in 2017.

The Bobcats defeated Bridgman 41-6 in its season opener.

Both games are scheduled to begin at 7 p.m.