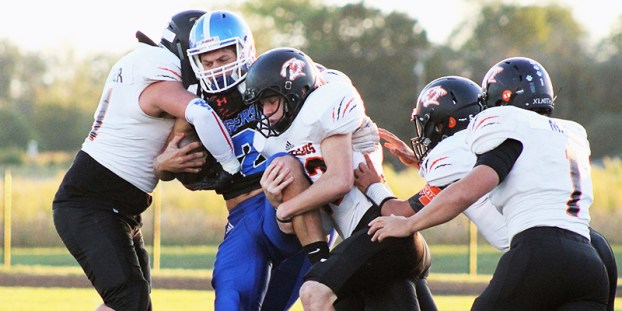 Rangers qualify for postseason with 61-8 win over Wildcats

CASSOPOLIS — For the fifth year in a row, Cassopolis has qualified for the Michigan High School Athletic Association playoffs following its dominating 61-8 victory over the visiting Marcellus Friday night.

Cassopolis running back Brandon Anderson started the scoring for the Rangers in the first quarter on a 28-yard rush. He would add another from 6-yards out the following drive. Anderson finished the game with eight rushes for 75 yards rushing, two receptions for 69 yards receiving and three touchdowns.

“We haven’t had to utilize him a whole lot this season,” said Rangers Coach Dan Purlee about Anderson. “He got a few more touches tonight, made the best of them and ran hard.”

The Wildcats could only muster 8 total yards in the first quarter and was 0 for 1 passing.

The Rangers exploded for four touchdowns in the second quarter with Anderson, Xander Smith and Tyrese Hunt-Thompson rushing for touchdowns on 6, 12 and 2 yards respectively.

Tashawn Morris would also score on a 20-yard touchdown pass from quarterback Dylan Green. Morris would add another 44 yards receiving in the game.

The Rangers finished 209 total yards of offense compared to Marcellus’ 52 in the second quarter.

Green had 140 of his 256 yards passing in the third quarter as he connected on touchdowns of 20 and 67 yards to Hunt-Thompson.

Green completed the night with 9 for 11 for 256 yards and three touchdowns. He also had 71 yards rushing.

“Dylan is our energizer bunny,” Purlee said. “The kid has a motor like no other, he is athletic and has a great arm. He overthrew a couple of passes but he has he desire to play hard like no other.”

With the MHSAA mercy rule in effect, Rangers freshman Ahsan Hart would put the final nail in the coffin on a one-yard rushing touchdown and continue Cassopolis undefeated season.

Watching Marcellus offense on tape, Purlee knew his defense would have to step up and they did by recovering two fumbles and allowing 87 total offensive yards he entire game. The Rangers would finish with 509 total yards.

“Marcellus does a good job of catching teams off guard with the Wing-T and spread,” Purlee said. “We did a great job of recognizing formations and played tough up front the whole night.”

Cassopolis will look to keep its undefeated record intact, as they travel to Hartford (5-1) Friday night.