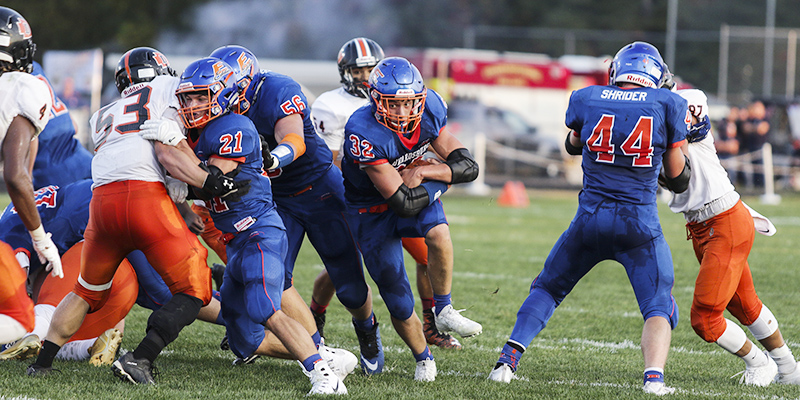 Chase Sager scored a pair of touchdowns in the second half as Edwardsburg rallied for a 28-20 victory over Dowagiac Friday night. (Leader photo/AMELIO RODRIGUEZ)

EDWARDSBURG — Chase Sager offered an example of the mental toughness required to be a star athlete.

The Edwardsburg running back was involved in a major car accident on Thursday afternoon when he lost control of the vehicle he was driving and hit another vehicle.

On Friday night, Sager pounded his way into the end zone for the game-winning touchdown against the Dowagiac Chieftains, lifting the Eddies to 4-0 with the 28-20 victory.

“He’s a great football player on both sides of the ball,” said Edwardsburg coach Kevin Bartz. “He always runs the ball hard. He gives his all defensively. With the situation he had yesterday with the accident, for him to come out tonight mentally and do what he did on the field it says a lot about him as a person. He was a game changer tonight and we have a hard time winning this game without him tonight.”

The Chieftains knew they had a fight on their hands since the Eddies had outscored their opponents 187-8 in their first three games, but they didn’t back down from the challenge.

Dowagiac (2-2) took the opening drive right down the field.

The point after by Andrew Davis gave the visitors a 7-0 lead.

The Eddies would cut the lead to 7-6 on a 44-yard Nick Bradley touchdown, but a missed 2-point conversion.

Neither team found much offense in the second quarter and the score remained 7-6 at halftime.

The Eddies took the opening drive of the second half and marched right down the field and Bradley capped it off with a 28-yard touchdown giving the home team a 12-7 lead.

The Chieftains would not be held down long as they drove down the field. They ended the drive with Dudley finding Caleb Murphy in the back of the end zone. The PAT gave the Chieftains a 14-12 lead after three quarters of play.

The fourth quarter was the undoing for the Chieftains in their first loss of the season against Vicksburg, and it proved to be so again on Friday as they allowed 16 points in the final 12 minutes.

Sager would score from seven yards out to give the Eddies a 20-14 lead, but the Chieftains bounced right back and scored on a 4-yard Duan Simpson run to tie the game.

A blocked PAT kept the score tied 20-20 setting up Sager’s game winner with just 36.5 seconds remaining in the game.

Even down 28-20 with 30 seconds remaining, the Chieftains would not go away quietly.

After a bad kickoff gave Dowagiac the ball at the Eddies 49-yard line, a couple of plays and a penalty set the Chieftains up with one last play from the Eddies 13-yard line.

A pass from Dudley, intended for Murphy, was batted a couple of times before finally hitting the ground right next to the Chieftain receiver, ending the game.

“This is Edwardsburg versus Dowagiac,” said Dowagiac coach Mike Stanger. “That’s what the game is all about. It’s tough to lose like this, but I believe in our kids, and they will be alright. They will bounce back.

“Edwardsburg is a really good team, but we made them earn it tonight.”

Brandywine rally comes up short in 55-52 loss to…