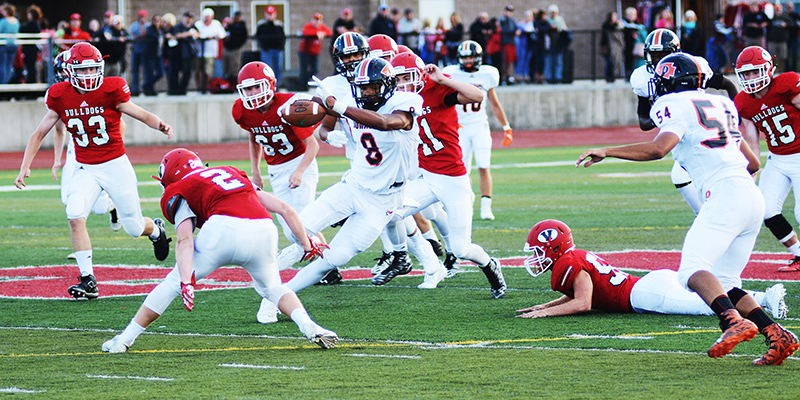 VICKSBURG — Veteran Dowagiac coach Mike Stanger said there is work to be done following the Chieftains’ 38-27 loss to host Vicksburg Thursday night, but all is not lost.

The Chieftains led 27-17 with 4:21 to play in the third quarter, when the Bulldogs took control of the game.

Bulldogs’ quarterback Garrett Ketelaar was nearly unstoppable in the final 12 minutes as he spearheaded the Vicksburg comeback.

Ketelaar finished the game with 215 yards rushing and a rushing touchdown. He also threw for 79 yards and a pair of scores.

Dowagiac’s Caleb Murphy was the star of the game for the Chieftains as he scored three times. Murphy scored on a 73-yard punt return, a 35-yard interception return and a 6-yard run.

“I thought Caleb played outstanding,” Stanger said. “Defense, offense and special teams. On defense we are moving him back and forth between defensive end and linebacker. He did a nice job of dropping back into coverage and then made a great run to return it for a touchdown. He also set up our other touchdown out of our wildcat package with a 45-yard run.”

Brenden Dudley was 10-of-24 for 122 yards and a 27-yard touchdown pass to Jamin Hunt, who led Dowagiac with three receptions for 45 yards.

“I thought the effort was there,” Stanger said. “We were winning by 10 with eight minutes left in the game, but I do not think we played great football. It was close to average at best. We are young in some spots and we need to work to get better.”

The Bulldogs (1-0) finished with 276 yards rushing and another 78 passing as Ketelaar was 4-of-12 with a touchdown pass to Ryan Morgan.

Dowagiac faces another tough opponent Thursday when Three Rivers comes to Chris Taylor-Alumni Field, which has had a facelift with new visitor and home bleachers having been installed over the summer.