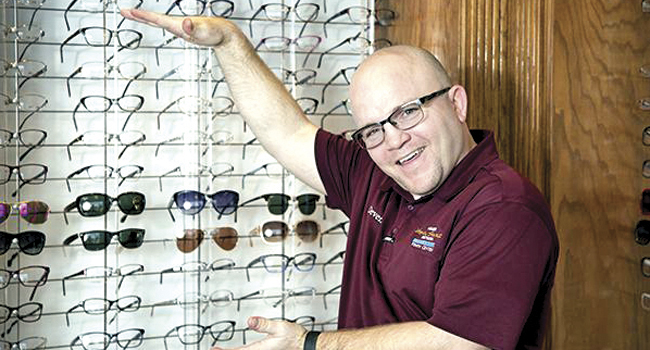 Deven Lambart, president of Southwest Vision Center, has had his eye on Buchanan for a while.

“[My wife, Jennifer, and I] started our first practice in Edwardsburg in 2012,” he said. “I always knew that Buchanan and Edwardsburg had similar traits, in that the communities are tight-knit and close.”

“He was getting ready [to retire] and was pushing his patients in different directions. So I reached out to him to see about possibly taking over his practice,” Lambart said. “We wanted to make sure we stepped in and helped out his patients as best we could. It was a really good fit with Dr. B’s practice, and it made sense for us.”

Lambart said he was excited about the opportunity because he believes that Southwest Vision Center’s style of practice fits with Dr. Benedict’s patients.

“My wife is on call. If the phone rings at home, we’ll come into the office,” he said. “It’s part of having the hometown doctor feel. That’s how we’ve always practiced, with that patient-first focus.”

Southwest Vision Center officially took over the practice from Dr. Benedict in December. Lambart said the location of the building has been a bit of a struggle because, while the physical address is 1045 E. Front St., Ste. B4, the building is tucked behind Buchanan Family Medical Center and faces Schirmer Parkway.

“It’s been hard, because we’re on the backside of Lakeland’s building,” he said. “We’re trying to work with the medical facility to get some signage by the road.”

However, Lambart has not been deterred and has been busy updating the facility in the past few months and trying provide more services.

“[My wife and I] tried to make [the practice] more available [to patients], so we opened it up to quite a bit more insurance [companies],” he said. “We went through and did a complete remodel, put new technology and equipment in. It’s still the same location, but with a lot of new equipment.”

Southwest Vision Center is a dry eye center of excellence and offers Prokera, biological bandages that use amniotic membrane tissue to treat ocular surface damage including corneal scars and chemical burns. The practice also acts as a cooperative care center with local surgeons, which allows patients to get pre-op and post-op care at the practice and only requires them to leave the office for surgery, according to Lambart.

“From pressure checking to our visual acuity systems, we are all digital,” he said. “We’re a complete medical office.”

Lambart said there are even some eye services that the practice offers that many people think require a hospital visit.

The practice also offers services for children. Lambart said there are balloons and a coloring table, and the visual acuity system will play Mickey Mouse to help children feel more comfortable during the test.

Southwest Vision Center has three locations: Buchanan, Edwardsburg and Three Rivers. The Buchanan location is open from 9 a.m. to 5 p.m. Monday, Wednesday, Thursday and Friday and from 9 a.m. to 6 p.m. Tuesday. Call (269) 241-0033 to make an appointment.