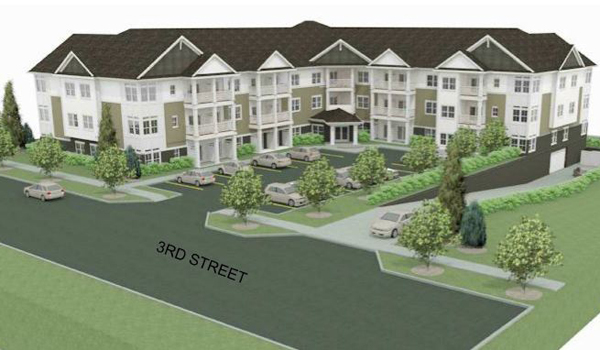 An approximate $10 million project to transform the area known as Kelly’s Corner into a 53-unit independent senior housing facility for low-income residents is still underway and moving toward completion.

Since last year, the Wisconsin-based private real estate company General Capital has been working on the project, located at the corner of Third and Broadway streets. Last month, company vice president Josh Hafron announced plans to start construction soon after purchasing the land in the fall of this year. Hafron said the goal is to offer pre-leasing by the summer of 2018, with the plan to open in the fall of 2018.

“We keep hearing rumors that [people think] it [the project] is not going to happen,” Hafron said.

In January, the company was awarded tax credits from the Michigan State Housing and Development Authority. The tax credits are part of a federal program that promotes affordable housing.

Hafron said the company’s project was selected to receive the tax credits due to the strong support from the city of Niles, optimum project location and great surrounding amenities.

Hafron said General Capital was drawn to the Niles area due to its downtown revitalization and need for more affordable senior housing options.

“[Niles] is ripe for a senior housing project,” Hafron said, “in the sense that nothing has been built exclusively for seniors for many years. A market study from MISHDA bears that out.”

Resurgence in the downtown Niles area, which has seen more businesses filling empty storefronts along the Main Street drag also encouraged the company that the area was the right fit.

“We like what is going on in downtown Niles in terms of some of the revitalization that is going on,” Hafron said. “We also liked the view of the river. It is close to amenities, like the hospital and the bus and grocery stores.”

To keep the project moving forward, the company will need to complete construction drawings, obtain building permits from the city and officially purchase the property.

The company entered into a purchasing agreement with the property owner last year, which was contingent upon several conditions, including receiving site and zoning approval from the city, obtaining a letter of support from the city, receiving payment in lieu of taxes (PILOT) and receiving MISHDA financing. The company has since checked these items off its list.

The Niles facility will be the second General Capital Berkshire project in Michigan and the ninth throughout the country.

The company has opened six Berkshire facilities in Wisconsin. In February, a 42-unit facility opened in Paw Paw.

Hafron said since the Paw Paw facility has opened, the company has able to fill vacancy up to 100 percent.

Four buildings are located on the property. The plan is to demolish the buildings and establish the 55,000-square-foot Berkshire Niles.