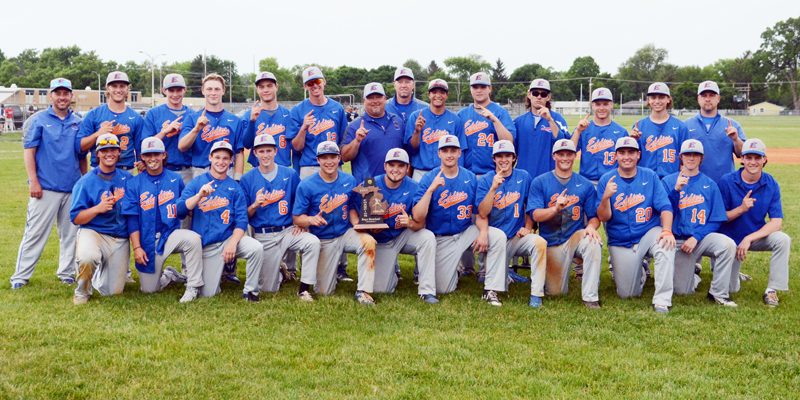 A year ago, the Edwardsburg baseball team had eight runs on the scoreboard against Niles in the seventh inning.

The Vikings erased an 8-4 lead and edged the Eddies 9-8 to win the Division 2 district championships.

This year, Edwardsburg led 8-0 in the seventh inning when the Vikings finally put some runs on the board.

But unlike 2016, an 8-0 lead was too much for host Niles to overcome and the Eddies walked away with an 8-3 victory and the district championships.

Pitching and defense was the name of the game for the Eddies on Saturday.

Zach Priebe went the distance in the opening game as he tossed a three-hitter with seven strikeouts.

In the championship game, Joe Raab worked into the seventh inning before running out of pitches.

Raab did not allow a run on five hits and eight strikeouts. Jake Robinson came on in relief for the Eddies.

“We came out and we played ball today in both games,” said Edwardsburg coach A.J. Gaideski, who is a Niles graduate. “Good pitching and great defense. That is what it takes to win in the postseason. That is what we did today.

“Those guys (Priebe and Raab) did a great job. They mixed it up and kept people off balance. Priebe was spotting the ball really well and he was getting his curve ball over. Raab was throwing four different pitches today — fastball, curveball, change up and slider. He did a heckuva job mixing them up.”

Niles coach Mike Vota knows it all came down to offense. The Vikings have struggled all year to put runs on the board and the district tournament was no better.

“We didn’t swing the bats well today,” Vota said. “We didn’t get things in play. We had to struggle, scrap and fight to win the first game. But these are good kids. I feel like we won with these guys because in life they’re going to be good people.’’

Niles and Edwardsburg almost did not make it to a re-match of last year’s championship game as both needed extra innings to advance.

Edwardsburg scored five runs in the eighth inning to defeat Paw Paw 6-1 in the first semifinal Saturday, while Niles scored a run in the eighth to edged Dowagiac 2-1.

Against Paw Paw, Landen Cebra drove in the game-winning run in the eighth inning.

Austin Hurt and Caden Goggins both drove in a pair of runs in eighth with Hurt’s being a double.

Edwardsburg also got a triple by Joe Hess.

Jakob Huffman drove in the game-winning run for the Vikings in the eighth inning.

His brother, Drew Huffman, went seven and two-third innings before reaching his pitch limit. Huffman allowed one hit and struck out 13.

Edwardsburg will host the Division 2 regional tournament Saturday and will face Battle Creek Harper Creek, while No. 7-ranked Lakeshore will face co-Wolverine Conference champion Vicksburg in the opening game at 10 a.m.