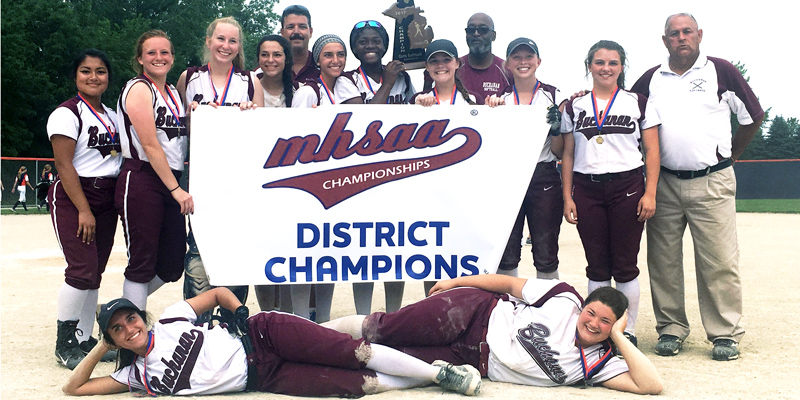 BRIDGMAN — It has been an emotional rollercoaster ride for veteran Buchanan softball coach Mike Welsh.

That emotion came to a head as the Bucks captured their 12th Division 3 district championship under his tenure with a 7-0 win over host Bridgman Saturday.

Welsh, who has 691 career victories, was informed over the winter that he would not be retained as the Buchanan head coach following this season.

He originally planned to not tell his team until after their final game, but when questions started to arise shortly after the start of the season he decided to let them know.

Welsh has coached the Bucks for the past 28 years and has numerous conference, district and regional championships under his belt.

He led Buchanan to a pair of state finals appearances, but nothing topped Saturday’s district title emotionally for him and for his team.

After switching between a pair of pitchers during the regular season, Welsh decided to go with senior Sammi Luzadre for both games Saturday.

The move paid off as Luzadre tossed a one-hitter in shutting out arch rival Brandywine in the opening game 3-0 and then tossed a two-hitter in the championship game against Bridgman.

“What do you say, back-to-back shutouts?” Welsh said. “I don’t care who you’re playing, you shut two people out in the same day in districts. She pitched great ball. I told her the other day, because we’ve been flip-flopping pitchers all year, ‘we are putting the saddle on your back and you take us there.’”

The Bucks (23-14) put three runs on the board in the first inning and then added two in the second inning to up their advantage to 5-0. Single runs in the fourth and sixth innings were just icing on the cake.

In the semifinals against Brandywine, the Bucks grabbed a 1-0 lead after one inning of play and then scored twice in the third to cap the scoring.

Erica Donathen doubled for the Bucks.

Bridgman blanked Cassopolis 10-0 in the other semifinals, which lasted just five innings.

Buchanan will now set its sights on a regional championship as it heads to Coloma to face Hopkins at approximately noon after the host Comets face Schoolcraft at 10 a.m.