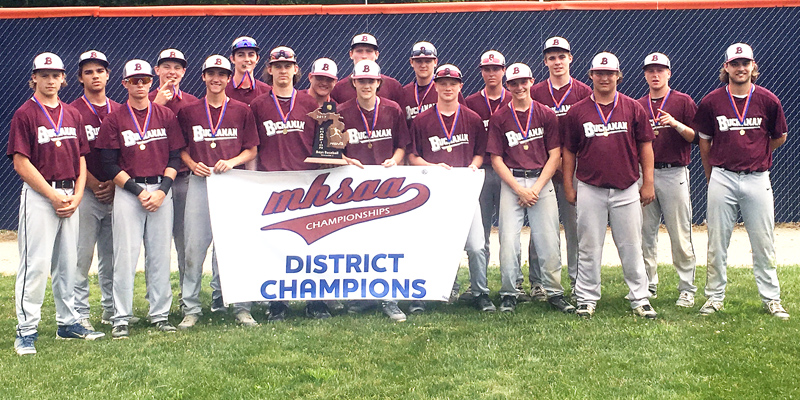 The Bucks had to go to the bullpen early in both games, but were able to knock off arch rival Brandywine 5-4 in the semifinals and then defeat host Bridgman 4-3 to claim the championship.

Tanner Lilly got the start for the Bucks (14-13) in the championship game, but had to give way to freshman Jacob Hoover, who came in in the first inning and worked five and two-thirds to earn the victory.

Hoover did not give up an earned run, while allowing two hits with four strikeouts.

Dalton Riddle pitched an inning of relief to earn the save.

Buchanan trailed Berrien Springs 3-0 heading into the sixth inning when it scored a pair of runs to cut the lead to 3-2.

Two more runs in the seventh gave the Bucks the title.

A Shamrock error, a single by Brandon Rogers and Hoover being hit by a pitch set the table for Buchanan.

“This was probably the most special because we’ve struggled all year long,” said Buchanan coach Lonnie Hoover. “The boys showed that they never gave up, they never lost their heart, so I think this was probably the most special of all three of them.” In the semifinals against Brandywine, Riddle came on in the third inning for starter Kyle Leazenby to pick up the victory.

Leazenby worked the first two and two-third innings before Riddle came on and worked the final four-plus innings. He did not give up an earned run on two hits with five strikeouts.

The Bucks scored three runs in the first inning, but trailed Brandywine 4-3 heading to the bottom of the fourth.

The tying run scored when Hearington was safe on an error by Scott Miller as he tried to cut down the Buchanan runner at the plate.

The game-wining run scored on the same play Hoover came home when the ball got away from the catcher.

Joe Covyeou took the loss in relief of Toby Fox.

Hearington was 2-for-3, while Lilly doubled for the Bucks.

Brady Duval and Max Douglass each had two hits for the Bobcats. Douglass doubled and drove in a pair of runs.

Cassopolis dropped a 2-1 decision to Berrien Springs in the other semifinal.

Xander Smith turned in a solid pitching performance for the Rangers as he tossed a three-hitter.

The Shamrocks scored both of their runs in the third inning against the Rangers, who finish the year 7-15.