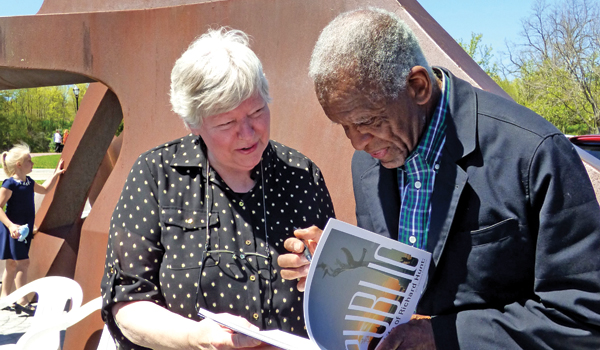 Past, present and future came together Sunday afternoon with the rededication of the Richard Hunt sculpture in downtown Niles. The sculpture was relocated to its new location earlier this year near the intersection of Front and Main Streets.

The Hunt sculpture relocation came about after the sculpture was removed from its original location on the southeast side of the Main Street Bridge in 2014 at the start of the bridge reconstruction project. City officials and members of the Niles Public Arts Commission then decided to move it across Main Street to launch the city’s public arts project.

Niles Mayor Nick Shelton began the rededication program by looking back at the history of how Niles came to have the large Hunt sculpture entitled Hybrid Form II.

“Three brothers from Chicago decided in 1974 to give a memorial in honor of their grandparents which would make a lasting impression on the community,” he said. “Forty years later, the weather sculpture still stands. Today is both a rededication and reunion.”

Representatives of the Haas family who donated the sculpture more than 40 years ago were also on hand Sunday but did not speak. It was Albert, Howard and Robert Haas who gave the sculpture as a gift to the city in memory of their grandparents, Alfred and Freda Green, who settled in Niles a century earlier in 1874.

Hunt, a Chicago native and internationally acclaimed sculptor, has had his large metal pieces installed in museums and public places across the country. In this area, his works can be found at the University of Notre Dame as well in the cities of Dowagiac and St. Joseph. A new Hunt piece is set to be installed later this year at the Krasl Art Center in St. Joseph.

“I started making larger pieces in the late 1960s,” Hunt told those assembled. “This was one of my first larger pieces. It’s interesting to see how something intended for one location makes its place somewhere else.”

In Niles, community leaders hope that the Hunt sculpture rededication will also prove to be history making. They want to make Niles the home for several public art displays throughout the downtown and along the riverfront.

The Niles Public Arts Commission was formed in 2015 with the goal of honoring the area’s history through art. Members were able to get funding from the Huizenga Family Foundation to pay for the Hunt sculpture relocation and continue to raise funds to pay for other sculptures.

They are now readying plans for their next project, which is the purchase of a Tuck Langland sculpture called “Generations,” to be placed outside of the Niles District Library at Seventh and Main streets. Commissioners have also talked of honoring Niles natives like automobile pioneers the Dodge Brothers, journalist Ring Lardner and singer Tommy James.

“Our goal is to bring people to Niles for art,” arts commission chairman Jeanne Watson said.

Langland, a South Bend sculptor and artist, was on hand Sunday. His works can be found throughout this area and around the country. His new work entitled “We Shall Overcome” depicting the June 21, 1964 meeting of Martin Luther King, Jr. and Notre Dame President Father Ted Hesburgh, will be dedicated in June at the Beacon Health Center plaza in South Bend.

Langland has seen the value of public art in rejuvenating communities such as has been the case in Dowagiac, where four of his sculptures are located.

“I keep using that as an example of what could happen,” he said. “Hopefully Niles will do what Dowagiac did when they took off the metal storefronts and reinvented themselves. They have 15 big sculptures in the downtown.”