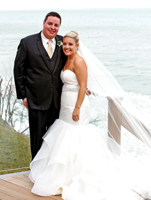 Kaitlyn Kowalski, of Sister Lakes, and James Mummaw, of Stevensville, were married Feb. 4, 2017, at the Sacred Heart of Mary Catholic Church. A reception took place at The Inn at Harbor Shores.
Kaitlyn is the daughter of Jennifer and Richard Kowalski. She is the granddaughter of Jack and Patricia Kowalski and Stephen and Helen Keresztesi.
She is a 2008 graduate of Dowagiac Union High School. In 2014, she earned a bachelors degree in business administration at Western Michigan University.
Kaitlyn works as a member service advisor.
James Mummaw is the son of Vanessa and Tim Mummaw. He is the grandson of Donald and Anita Mummaw and Arthur and Francis Vorath.
He is a 2001 graduate of Lakeshore High School. He attended Lake Michigan College and graduated with a degree in business in 2003.
He is the owner and operator of Mummaw Construction.
There were seven bridesmaids and seven groomsmen.
The wedding was officiated by Kaitlyn’s grandpa, Deacon Jack Kowalski.