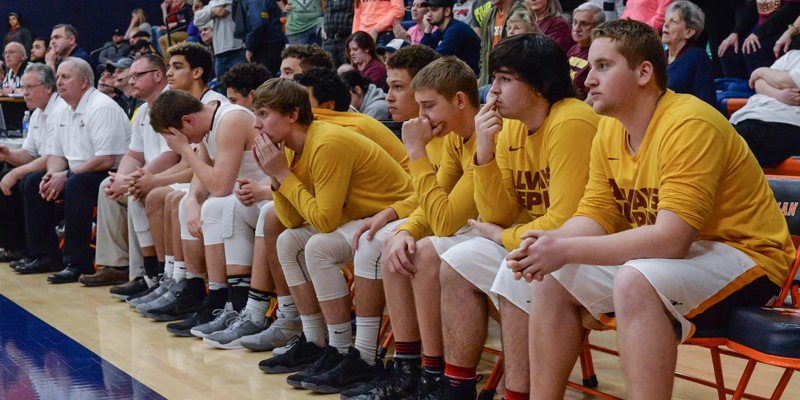 The faces on the Brandywine players tell the entire story as the Bobcats’ season comes to a sudden end Wednesday night. (Leader photo/ERIKA PICKLES)

BRIDGMAN — It was just like a scene out of a movie.

Down by one point in the final seconds of the game, a foul places the losing team on the free throw line. One made-shot will tie the game, two made-shots will win, but a missed basket likely will end it.

As the shot first goes up, it falls short, the time clock expires, and the underdog team wins the ball game.

Unfortunately, it wasn’t a movie. It was real life. And it might just be one of the biggest upsets in tournament play.

On Wednesday, Brandywine’s dreams were shattered as Class C district host Bridgman upset the BCS’ most dominant team, 39-38, in a game that left Bobcat players and fans in utter shock.

With three seconds remaining in the game, Brandywine sophomore Jaden Croom was placed on the free throw line for a one-and-one. His first shot bounced off the rim, the final buzzer sounded and it was over. Heads sank, tears fell and the highly-anticipated hopes of championship wins to come were ended.

“It hurts. It stings. We worked our butts off all year long, so to come up short tonight…this is tough,” Bobcat coach Nate Knapp said on his way to his team’s locker room.

Croom’s missed free throw was actually a pattern of several missed shots in the final minutes of the contest for Brandywine. The Bobcats missed five-key buckets inside the paint in the final three minutes of play, which could have ultimately given them the lead – and win – had they fallen in the hoop.

“We had it, but we have to finish. We missed eight layups in the second half. We just fell short,” Knapp said.

After opening the first period with a 14-12 lead, Brandywine held Bridgman scoreless in the second, while adding 12 additional points to its score. At halftime, the Bobcats led 26-12.

A technical foul on Bridgman coach Mike Miller early in the third didn’t shake things up too much for the Bees, who were able to close the gap to 31-30 entering the fourth.

And that’s when the shooting went downhill for the ‘Cats.

Bridgman busted into the final quarter by taking an early 34-31 lead. Brandywine’s first basket of the fourth didn’t come until the 5:30 mark, when Brady Duval sank a 3-pointer to tie the game at 34. It was the Bobcats who held a 38-37 lead with 1:37 to play after two successful free throws from Hunter Slaughter. But Bee guard Ryan Chang, who had a game-high 19 points, nailed his final two free-throws of the night to give Bridgman the 39-38 advantage, and eventual win.

The only other player to score in double digits was Slaughter for the Bobcats, who ended the night with 17 points.