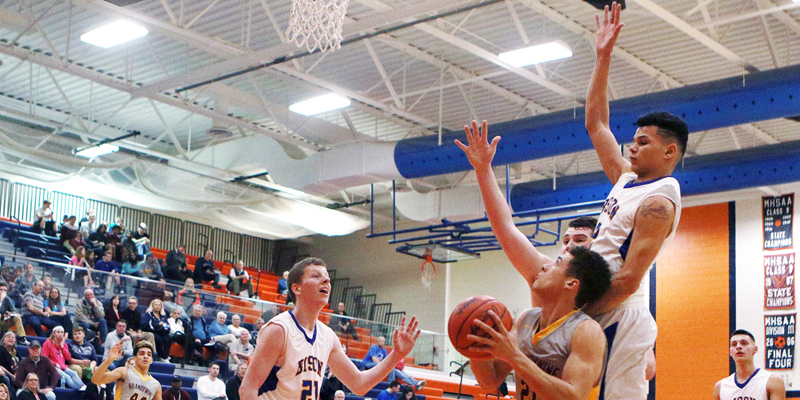 Brandywine’s Vinny Peel gets fouled by New Buffalo during action in the first round of the Class C district tournament at Bridgman Monday night. (Leader photo/Amelio Rodriguez)

The Bobcats’ trap forced numerous turnovers in a 57-44 victory over New Buffalo in the opening round Monday night.

The two teams traded baskets in the first quarter as Brandywine clung to a slim 9-8 lead after the first stanza.

The second quarter is when Brandywine made their presence felt on both sides of the floor.

While the offense rattled off 16 points in the quarter, the defense held the Bison to only four points on 2-of-5 shooting as the Bobcats raced to a 25-12 lead at the break.

“They struggled against our trap tonight,” said Brandywine coach Nathan Knapp. “We were working hard, but to hold New Buffalo to just 12 points in a half, we did a lot of good things.”

Hunter Slaughter led all scorers with 23 points, and was the only Bobcat player in double digit scoring.

“He’s a heck of a ball player,” said New Buffalo coach Randy Mas about Slaughter. “He’s quick, he’s got good handles, and he handles the ball really well. He has a quick first step where he get’s by everybody and when he can’t get to the hole he dishes it off for good easy shots.”

“Hunter does a lot for us,” Knapp said. “But our defense carried us tonight”

The Bobcats had increased their lead to as many as 15 points in the third quarter before the Bison made a run of their own to cut the lead to 10 entering the fourth, 38-28.

New Buffalo kept pushing the Bobcats in the fourth, cutting the lead to just five, 45-40 with 4:27 left in the game.

However, some missed shots and some forced turnovers allowed Brandywine to extended its lead back to eight before the Bison started fouling, forcing the Bobcats to make free throws.

Brandywine went 8-of-8 from the line on the night, including Slaughter connecting on all six of his attempts in the final quarter.

Brandywine (19-2) will face host Bridgman at 7 p.m. today with the winner advancing to play the winner of the Cassopolis/Watervliet contest for the district championship at 7 p.m. Friday.