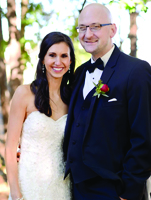 Jenna Lorraine Gisi and Tate Jonathon Burgess, both of Charlotte, North Carolina were married Oct. 22, 2016, at Lake Norman in Cornelius, North Carolina.
Jenna is the daughter of Lorraine and David Gisi. She is a graduate of Millersville University. She works as a system sales analyst.
Tate Jonathon Burgess is the son of Kathleen and Terry Burgess. He is the grandson of Clayton and Margaret Walker, of Niles. He is a graduate of Ferris State University. He works as a system analyst.
The bride’s attendants were Nicole Matthews, matron of honor; Amanda Peterson, maid of honor and bridesmaids, Amie Leach and Michelle Gisi.
The groom’s attendants were Blake Burgess, best man and groomsmen, Ryne Dowling, Brooks Bonner and Jared Gisi.
The wedding was officiated by Steven Lemons.
After a cruise to Antiqua the couple will reside in Harrisburg, N.C.