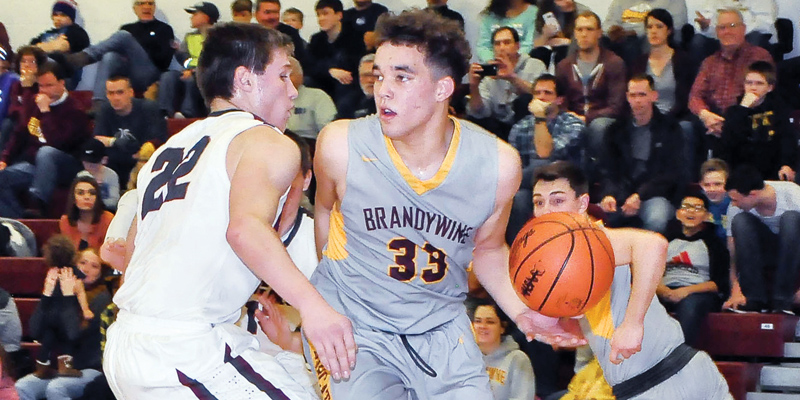 Many athletes dream of being in a situation where the game winning point lies on their shoulders, but very few get to experience it as a reality.

For Brandywine senior Scott Miller, that scenerio was all too real Friday night in Buchanan.

Miller was placed on the free-throw line with 0.1 seconds left to play after being fouled at 3-point range. The Bobcats trailed the Bucks 73-72 in a thrilling comeback by Buchanan with just seconds to play.

Miller missed his first free-throw attempt, but sank the next two, giving Brandywine a thrilling 74-73 BCS Red Division victory. The win keeps the Bobcats undefeated with a 12-0 record.
Brandywine did not have an impressive game at the free throw line, sinking only 20-of-40 on the night. Head coach Nate Knapp said that was very unusual for his team, who is typically “spot-on when it comes to free throws.” When asked what his thoughts were about Miller’s position at the line, Knapp said he was a little worried.

“With the way we were shooting all night, I didn’t know what to expect,” he said. “But I knew he had three chances to make one shot. All he needed was one shot because at that point I knew our team would be fine. When he made that second one, I said ‘thank goodness.’”
Miller ended the night with 21 points for Brandywine. Knapp also credited Miller’s defensive performance against Buchanan senior Andrew McQuirt, who scored a game high 37-points, including eight 3-pointers.

“Miller did a heck of a job on McQuirt,” he said. “He had to guard him all night long and McQuirt wore him down.”

What led to the one-point difference in the final seconds of the fourth period was a combined comeback effort from several Buchanan players. McQuirt nailed two 3-point buckets with under one minute to play. Kyle Leazenby added a 3-pointer and Devin Brown sank the bucket that gave Buchanan the one-point advantage.

Buchanan coach Reid McBeth credited every member of his team for their offensive and defensive showing, not only in the final minutes of the game, but during the entire contest itself.
Especially considering the Bucks had only eight dressed players for the game.

“Our kids have been sick as dogs and some of them were still sick out there playing tonight,” he said. “We had guys who usually see only a few minutes of playing time come out and give it their all for almost the full 32 minutes. To play a 12-0 team the way we did tonight. I’m proud of our performance. Sure, we made some mistakes, but we played hard and fought to the end.”

McBeth especially acknowledge seniors Kenny Gathright and Ahmad Thompson, and junior Devin Brown, all of whom he said played critical rolls for Buchanan.

“Kenny did a great job for us,” McBeth said. “Ahmad made a big bucket and Devin put in points when we really needed them. Andrew (McQuirt’s) performance was pretty amazing as well. Putting up 37 points and bringing us back the way he did at the end there. Everyone played hard.”

It was Buchanan which held the lead at the end of the first quarter, 21-16. The game opened as intense as expected in a battle of two long-standing rivals.

McBeth was even hit with a technical foul at the 2:33 mark of the period after questioning a call.

The biggest lead of the night for the Bucks came at the opening of the second quarter, when Isaiah Rimpson nailed a three to give Buchanan a 24-16 advantage.

The eight-point gap slowly closed as the quarter went on, and Brandywine ended the half up 41-37.

The Bobcats stayed ahead the majority of the third, with the exception of a 51-51 tie with just over one minute left in the period. Hunter Slaughter, Jaden Croom, Vincent Peel and Miller all contributed buckets in the third for the Bobcats.

Slaughter led his team with 22 points on the night, and, along with Miller’s 21, Peel added 15.

“Buchanan — my hats off to them,” Knapp said. “They played hard and physical all night long. We got challenged tonight. We have a lot to learn from this because we are beatable and we have to eliminate those mistakes. But all around it was a great team win and a hard-fought one at that.”