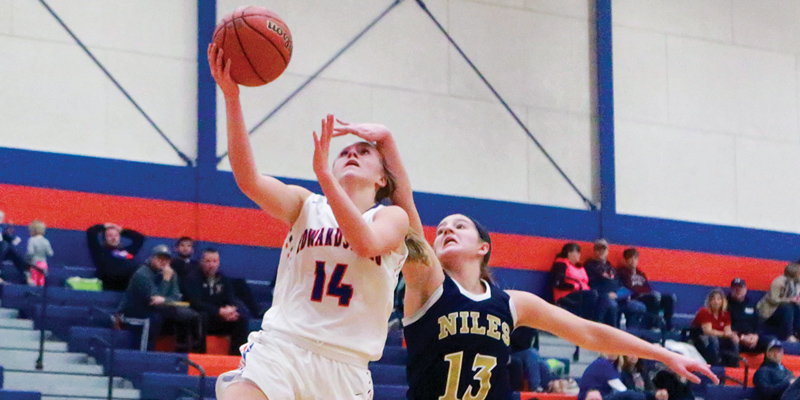 The Edwardsburg varsity girls’ basketball team hosted Niles on Tuesday night in the first basketball game of the season for both teams.

The Eddies would come from behind to claim the 37-32 victory.

Niles started the game hot from the floor, jumping out to an early lead it built to as many as six points, 13-7, before senior Emily Gaines banked in a 3-point basket at the first quarter horn to give the visitors a 16-7 lead after one quarter.

“Our girls started off really well,” said first-year Niles coach Jessica Johnson. “Then we stopped doing what was working for us. The plays we’d been working on the entire time and putting it down into the post.”

“We didn’t come ready to play,” said Edwardsburg coach Jon Pobuda. “I think based on what we did to them all summer and what we did to them last year we thought we’d just come in here and walk away with it, but that wasn’t the case and I give them all the credit. We didn’t match their intensity to start.”

After the first quarter, both teams struggled to put the ball in the basket.

The third quarter is when Edwardsburg started to make a comeback, led by senior Brayden Curtis and sophomore Kaitlyn Zarycki, who each dropped in four points in the quarter.

Curtis scored all four of hers from the charity stripe, which was big for the Eddies seeing that they were only 2-of-9 up to that point.

The Eddies did pick up the intensity on both ends of the floor as they outscored the Vikings 14-2 in the quarter and took the lead away from Niles as they led 28-23 heading into the final eight minutes of play.

The Vikings’ lone basket of the third quarter came from freshman Alycia Patterson, who was making her first varsity start.

“Alycia, for a freshman, had great composure for the most part for someone starting her first game,” Johnson said.

While both teams managed to score nine points in the final stanza, it was the third quarter that ultimately decided the outcome.

“The third quarter was our big quarter,” Pobuda said. “I’m not sure what we were doing the other three quarters, but we’ve got work to do and we are going to get after it in practice.”

The Eddies were led in the scorebook by Savannah Dixon with 11 points, followed by Zarycki with nine and Curtis with eight.

The Vikings were led by Gaines with a game high 13 points and Patterson with nine.