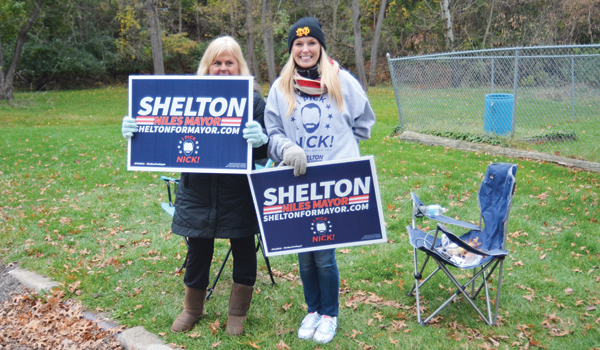 From the left, Kathleen Shelton stands with Allison Hayes, Nick Shelton's fiancee outside of a polling place on Tuesday.

After 17 years, the City of Niles will have a new mayor in town: Nick Shelton.

Shelton won the election with a total of 2,791 votes, according to unofficial results Tuesday night.

As the votes poured into the polls, Shelton said he was running around the city of Niles visiting each polling place and gathering results. He was almost at City Hall when the news came: he had won the race for Niles mayor.

“I’m really excited about the future and thankful for the vote,” Shelton said. “I’m excited to act on the potential that Niles has.”

Shelton said he sat down on a bench near Second Street to absorb the news.

“It’s really kind of surreal right now,” he said. “I didn’t know what to expect coming into the day.”

Since April, Shelton has squared off against opposing candidate Bob Durm, a current mayor pro tem and longtime city councilman. While the candidates agreed on many things throughout their campaigns, including the importance of drawing more people and tourists to experience downtown business and nature in the Niles area. Where the candidates most seemed to disagree was whether Shelton’s “fresh perspective” or Durm’s experience would be more beneficial to the City of Niles.

Durm received 893 votes, according to unofficial results. He will reside on city council for the next two years.

Shelton said throughout the campaigning process, Durm had been kind

“I’m really appreciative of Bob Durm for how friendly he has been,” Shelton said. “And I’m really excited to work with him. We are like-minded and we both have the best interest for Niles residents at heart.”

While the outcome for Durm was disappointing, he said that he wished Shelton the best of luck. He also expressed gratitude for the voters who showed him support during a campaign he said took tremendous effort and hard work.

“Thank you to those who supported me,” Durm said.

Shelton will serve as Niles mayor after Mike McCauslin, who was the mayor to Niles for 17 years.

“There are certainly big shoes to fill, but I’m ready for the challenge,” Shelton said.

Reflecting on his campaign months, Shelton said he laid a lot of groundwork, which gave him the opportunity to meet with many Niles residents and hear their concerns.

“Campaigning experience has been awesome,” Shelton said. “It has been a lot of hard work, more work than I planned.”

It was work that Shelton said he could not have accomplished with out the help from his family, friends and his fiancée Allison Hayes.

Looking forward, Shelton said he would first meet with City Administrator Ric Huff for a discussion.

“I’m ready to listen to what Niles residents have to say and tackle all the things that Niles needs.”

It was Hillary Clinton versus Donald Trump, only for this debate the presidential candidates were embodied by Brandywine High School... read more