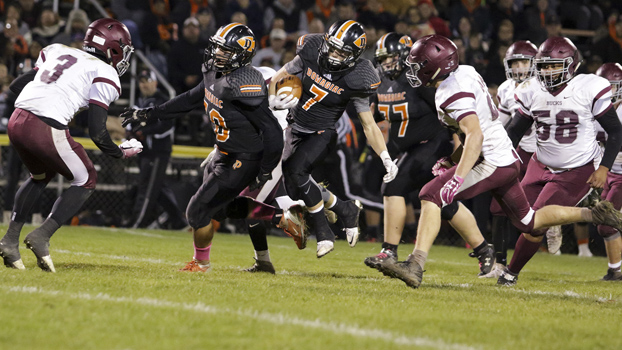 Playoff football tends to bring out the playmakers and Friday night in Dowagiac was no exception.

Chieftains’ running back Erik Walker was the biggest playmaker in the game during the Division 5 pre-district matchup against Buchanan.

Walker scored three of the Chieftains’ touchdowns, all on big plays, but none bigger than the 76-yard interception return with just three minutes remaining in the game to give Dowagiac the 28-25 win.

“That kid (Walker) is a complete spark plug for us,” Dowagiac coach Mike Stanger said. “He doesn’t open his mouth. He doesn’t say anything. He just makes plays.”

Dowagiac jumped on the Bucks early as Walker out ran the Bucks defense for 37 yards to go up 6-0 at the 6:03 mark of the first quarter, and then Elijah Williams took a Brenden Dudley pass 22-yards through the Bucks secondary giving the Chieftains a 12-0 lead at the end of one quarter.

The Bucks wouldn’t go away quietly however. Touchdown runs from seniors Jacob Graham and Darren Shearer gave Buchanan a 13-12 lead. A lead they would carry into the half.

The second half started with Walker taking a squib kick 77-yards straight through the Bucks coverage team all the way to the house for a 20-13 lead, and just that quickly the Chieftains once again had the momentum.

The Bucks would drive deep into Chieftain territory, but after a big third down pass from Shearer to Chad Adkerson set up the Bucks with a first-and-10 from the Dowagiac 25-yard line, it was the Chieftains defense that made the plays as the Bucks failed to convert on fourth down turning the ball back over to the Chieftains.

After another failed Chieftain drive, it was the Bucks offense that took over. Shearer led Buchanan on a drive that was capped off with a 57-yard pass to Dalton Riddle, but a missed point after left the Chieftains clinging to a 20-19 lead after three quarters of play.

In the fourth and final quarter, the Bucks would take advantage of Dowagiac miscues and control the ball and the clock.

Jacob Graham’s second touchdown run of the night with 10:58 to play in the game giving the Bucks the lead 25-20, setting up Walkers opportunity to be the hero.

On the ensuing kickoff Buchanan would recover a muffed squib kick and the Bucks were back in business.

The Chieftain defense needed to step up big and that’s exactly what they did.

First the defense was bailed out when J.J. Smith stripped the ball from Adkerson as he battled for extra yardage to try to reach the line to gain deep in Chieftain territory.

Then after the Bucks offense methodically ran time off the clock and the ball right through the heart of the Chieftain defense forcing Dowagiac to use its timeouts, it was a third down pass play that proved to be the biggest play of the game.

Walker jumped a slant route to Riddle and took the Shearer pass all the way back the other way for the score. A 2-point conversion to Austin Jones gave the home team the 28-25 lead with three minutes remaining.

“We were between a rock and a hard place, but we found a way to get out,” Stanger said. “Our kids never quit, they never gave up, and they never stopped believing in each other and that’s the most important thing.”

Another valiant effort by the Bucks offense came up just short as Shearer’s pass to Adkerson on fourth-and-seven from the Chieftains’ 11-yard line bounced off the grass sealing the win for the Chieftains, who advance to the district championship game at Berrien Springs Friday.

The Shamrocks blew out Olivet 60-7.

Burke off base with comments about college basketball