Buchanan seniors deliver in the clutch 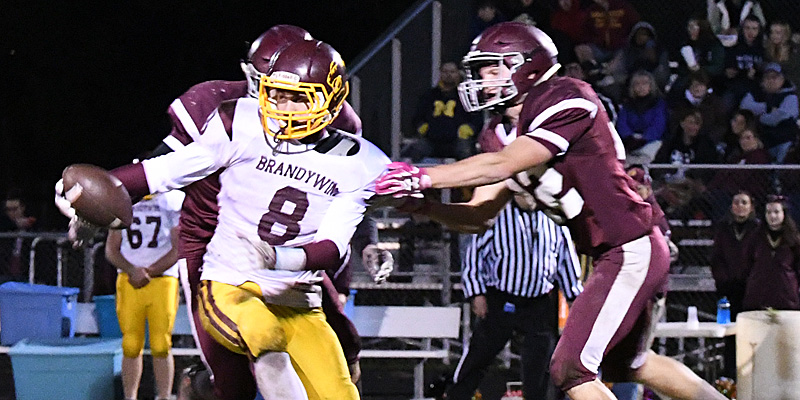 For the 14 Buchanan senior football players, this Senior Night was a special one.

Rival Brandywine came to town and hopes of a MHSAA state playoff berth was on the horizon in the final game of the season.

The past two meetings between these teams had seen each team hang over 50 points on the other, with Buchanan the latest team to do it. And it nearly happened again as the Bucks used a herd of touchdowns and stout defense to rout the Bobcats 48-12.

Receiving the ball first, Buchanan only managed to go nine yards before a tipped pass on the line of scrimmage resulted in Kyle Barnett intercepting the ball for Brandywine.

Unable to make anything out of it, the Bobcats punted and two plays later tallied the first points of the game on a Darren Shearer 62-yard pass to Kyle Leazenby.

“Darren (Shearer) has been sick all week so we didn’t want him to get too beat up,” Buchanan Head Coach Reid McBeth said. “We let him do his job and then we got him out of there.”

Both teams traded punts before Brandywine fumbled on their third drive.

After going backwards on three straight plays and a punts, Buchanan received the ball back and needed just 1:40 to go 66 yards and score their third touchdown of the game. Jacob Graham found the end zone from 15 yards out.

The second quarter didn’t go Brandywine’s way from there on out.

The Bobcats fumbled the ensuing kickoff and Buchanan found the end zone again, this time on a Chad Adkerson 8-yard rush.

“Darren (Shearer) is our go-to guy and we wanted to save him for the playoffs,” Buchanan Senior Adkerson commented. “We wanted to rest him up and I have played Quarterback before so I was able to fill in for him in today’s game a little bit.”

An errant pass from Bobcat quarterback Corbin Eckenberger found the hands of Buchanan’s Hunter Goodrich who returned it 60 yards for the third touchdown of the second quarter.

Buchanan would then add a sixth touchdown of the first half from a hook and ladder play that went 60 yards in one play. Adkerson would go for 54 of those yards to find his second touchdown of the game.

“We put that play in on Monday,” Adkerson said. “It was talked about all year and we finally put it in. We only ran it eight times in practice.”

“We had to put something in to entertain the troops today,” McBeth said.

With the mercy rule running clock into effect, the start of the second half continued to go Buchanan’s way as Kyle Leazenby intercepted a Dillon Plew pass, however the Bucks were unable to get the ball moving and turned it over on downs.

Brandywine would then answer on their first score of the game as Eckenberger orchestrated an excellent 62-yard drive in 5:18 and scored from 1-yard out. The 2-point conversion attempt was unsuccessful and the running clock continued to be in effect.

Buchanan would then put their final score of the game up as Adkerson would score his third touchdown of the game.

“Tonight was emotional,” Adkerson said. “I almost cried on the way down the stairs at the beginning of the game. I’m really going to miss hanging out with my teammates and the times we had.”

Eckenberger would put the final points of the game on the scoreboard on a 4 yard rush.

“I told the guys that we need to raise the intensity level for next week,” McBeth said. “Last week we had our heads hanging a little low and today it wasn’t all the way there. You know these are 16- and 17-year-old kids and you hope that every day they come out with this killer instinct and some days it just isn’t there. But they know that next week is going to be different. We had a good last game for these 14 seniors.”