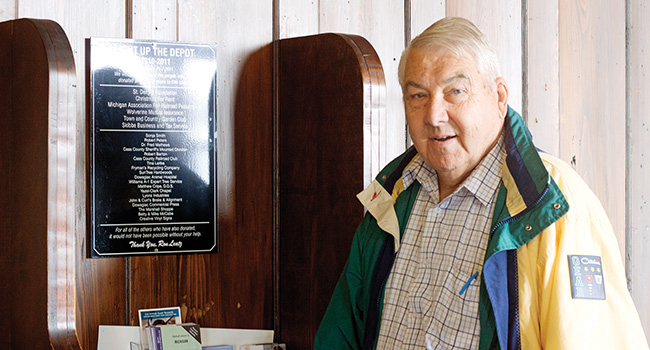 Dowagiac Amtrak station volunteer Ron Leatz stands next to a plaque listing some of the donors to the 2010 “Light Up the Depot” campaign inside the train station. Leatz is leading a second round of fundraising on behalf of the historic downtown train station, seeking to raise $5,200 from the community to pay for repairs to the depot’s outdoor lights. (Leader photo/TED YOAKUM)

For the past five winters, the bright white lights hanging from the roof of Dowagiac’s historic train depot have shined like a warm beacon during cold evenings downtown.

That brilliant visage may soon burn out, though, without some generosity from the local community.

Dowagiac’s Ron Leatz has recently began a new fundraising campaign to pay for repairs to the 1903 train depot’s outdoor lighting system, which has begun to fail due to ongoing wiring problems. Leatz is seeking to raise $5,200 in donations to fund the work, in hopes of having it completed by year’s end, he said.

Leatz, a volunteer with the Michigan Association for Railroad Passengers who serves as the “host” for travelers
riding the Amtrak trains that stop at the depot, was responsible for organizing the initial “Light Up the Depot” campaign in 2010 that funded the installation of the lights to begin with.

The Dowagiac man was inspired to install such light fixtures on the historic train station after seeing the efforts of the Niles’ Four Flags Garden Club, which pays for the installation of Christmas lights every winter at the city’s own vintage Amtrak station, Leatz said.

In order to accomplish his goal of lighting up Dowagiac’s depot, Leatz collected $8,000 from residents and businesses throughout the Dowagiac community in 2010. The city, which maintains the depot, then used the funds to pay for a contractor to install Christmas lights atop its roof.

“They used a very low wattage for the bulbs, to make it look like the kind of lighting used at the turn of the century when the station was built,” Leatz said.

“I did not want to collect such a large amount of money and only have them up for only 30 or so days,” he said.

The elements have taken their toll on the more than 2,200 feet of wiring powering the light bulbs, though, with the damage causing issues to the building’s electrical system, he said. In order to fix the problem, the wiring will need to be completely replaced, though the installer should be able to reuse the 1,700 light bulbs currently in place, Leatz added.

With the winter season rapidly approaching, Leatz said he is beginning to go door-to-door asking for help with the new fundraiser.

“When we did this the last time, we had people donating just a dollar or even pocket change to the effort,” he said. “When you are trying to raise this much money, every little bit adds up.”

People wishing to contribute to the cause can write checks to “Light Up the Depot,” and can either drop them off to the city treasurer office inside Dowagiac City Hall or mail them to the city at P.O. Box 430, Dowagiac, MI 49047.