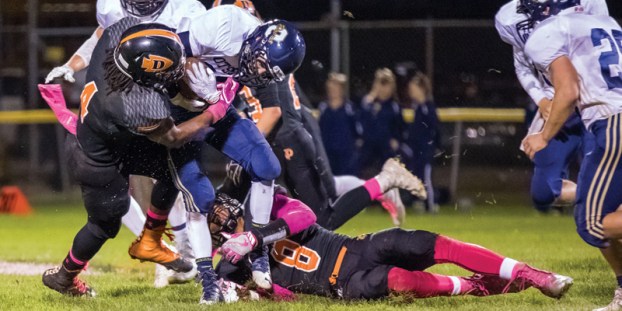 Dowagiac’s Jamin Hunt (4) and Caleb Murphy (8) combine to bring down an Otsego running during the Chieftains’ 51-14 win over the Bulldogs Friday night. (Leader photo/TIMOTHY RITTER)

Dowagiac a game away from earning playoff spot

After starting the season with some tough losses to Vicksburg and Three Rivers, the Dowagiac Chieftains found themselves at 2-3 and needing to win their final four games in order to gain automatic qualification for the MHSAA State Tournament.

Wins over Plainwell (30-12) and Sturgis (37-0) the previous two weeks had the Chiefs at 4-3 entering Friday night’s home finale against the 1-6 Otsego Bulldogs.

Not only were the Chieftains in their traditional black uniforms, but the players had dressed in pink as well for the annual “Pink Out” for October’s Breast Cancer Awareness Month.

Receiving the first half kickoff, Dowagiac marched right down the field in 2:52 and scored the first touchdown of the game (62 yards in 7 plays) on a junior quarterback Brenden Dudley 35 yard pass to junior wide receiver Ellijah Williams. The extra point by Hector Vazquez was unsuccessful.

Trading punts over the next two series between both teams, Otsego finally had the ball moving against the Chieftain defense, until senior defensive end Collin Dussel recovered an Otsego fumble at the Bulldog 44-yard line.

“Coming into the first five games of the season we only had one takeaway and that was Allegan,” Dowagiac coach Mike Stanger said. “But since the defense has started to take the ball away and making plays, that is a big lift for the offense when your defense sets you up in a good position.”

Dudley tallied his third touchdown of the game on a 13-yard run and put the Chieftains up 28-0 with 5:07 left in the first half.

Otsego responded and finally get on the scoreboard with a 4:46 minute, nine-play drive that went 70 yards.

At halftime the score showed 28-7 with Dowagiac in control.

A quicker second half involved a lot of running plays for both teams and much of the possession going Otsego’s way.

But it was the Dowagiac offense that capitalized on their drives in quick fashion and a Bulldog safety that gave the Chieftains a 51-14 victory and just one win away from reaching the state playoffs. It was the third consecutive week the Dowagiac defense has recorded a safety.

“Earlier in the year we moved the ball well, we just couldn’t put in the end zone,” Stanger said. “We have actually outscored all of our opponents this year (minus Edwardsburg), but we are putting it in the end zone now.”

Senior running back Shawn Sirk scored two touchdowns on runs of 10- and 49-yards and senior kick returner Marcus Winchester-Jones returned a 65-yard kickoff on the ensuing safety to help lead the way in the second half.

“We have a lot of running backs and Shawn Sirk has definitely been in the mix,” Stanger remarked. “He is quick and explosive and he showed it tonight.”

Dowagiac’s travels to 4-4 Paw Paw to cap the regular season for both schools.

“We have gotten healthy over the past three games,” Stanger said. “And our juniors are getting a lot of playing time. They are starting to come into their own. These kids are working hard at practice and concentrating on the little things.”

A preview of the Division 3 District Soccer Tournament opener did not go the way of Dowagiac Wednesday night. The... read more