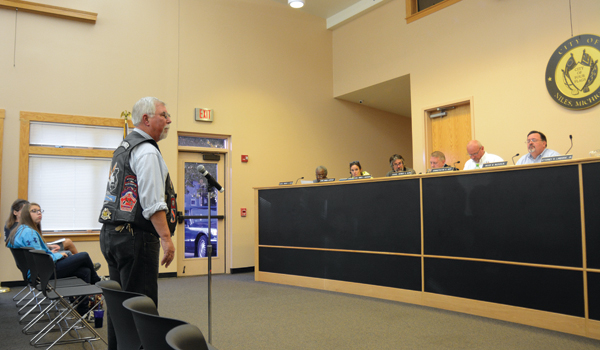 A plan to memorialize a deceased Vietnam soldier from Niles with a commemorative street sign is under review by members of the Niles City Council.
Two members of the Indiana chapter Rolling Thunder, a national POW-MIA and veterans advocacy group attended Monday’s city council meeting with the hopes that they could put up a memorial sign over the corner of 14th St. and Merrfield Ave. by Oct. 17, which will mark the 50th anniversary of the death of Private First Classman William Russos.
Russos grew up in Niles. He was only 19 when he was killed in action in Vietnam. Russo’s sister, Bev Moore, who is married to former chapter member Guy Moore, of Coloma, contacted the chapter and asked them for help in recognizing her brother.
“We are still pushing accountability for the people left behind,” said Buzz Opick, the chapter president, as he addressed council on Monday.
This is the third meeting the group has attended to try and receive approval, said Opick, a Granger, Indiana resident. He said he hadn’t expected that the process would be so challenging.
“I knew it was going to be kind of rough, but I didn’t think they would have been so entrenched,” Opick said.
Mayor Mike McCauslin said that council members have been working to try and move forward with the project.
“We discovered that we don’t have a process or a policy to do that so the staff has been looking into that,” McCauslin said. “ The wheels turn slow, but they turn.”
City administrator Ric Huff said that council members have been collecting samples of policies from other cities. The next step is getting the policy committee to agree to a selected policy.
Huff also questioned why the chapter wanted to honor just one fallen veteran when so many in Niles have served.
“Because if we start picking this person and put a street after him then we have… I mean how many others have been from Niles?” Huff said.
Huff asked chapter members to also consider a larger memorial that would recognize all Niles veterans.
The national members of Rolling Thunder, Opick said, are implementing the street sign project all over the country. He said Russos was selected because Moore approached him with the hopes of having her brother recognized.
Fellow chapter member, David Menefee, of Benton Township, teared up when he recalled the scene Moore described to chapter members about the day when she found out her brother had been killed.
Menefee said Moore, who was 10 years old, arrived home one day to find two military vehicles parked in front of her house.
“Her heart sank,” Menefee said. “When she went inside her mom and dad were crying.”
Bev’s father asked her to never forget William and the sacrifice that he made.
The chapter members agreed that the sign would be a great way to help Bev’s family and the community remember the soldier who grew up in Niles at 14th Ave. and Merrfield Street.
“That would be a great way to keep the citizens of Niles aware that they have a hero from Niles,” Menefee said.

From hunters interested in growing the area’s population of game birds to citizens simply interested in conserving the county’s natural... read more

RIDINGS: Assaults on journalists are assaults on rights of all Americans

LETTER TO THE EDITOR: Introducing the helicopter

WILSON: The value of free advice

LETTER TO THE EDITOR: Obama did not have a successful administration

LETTER TO THE EDITOR: Enough is enough

Marcia A. Pruett, of Dowagiac