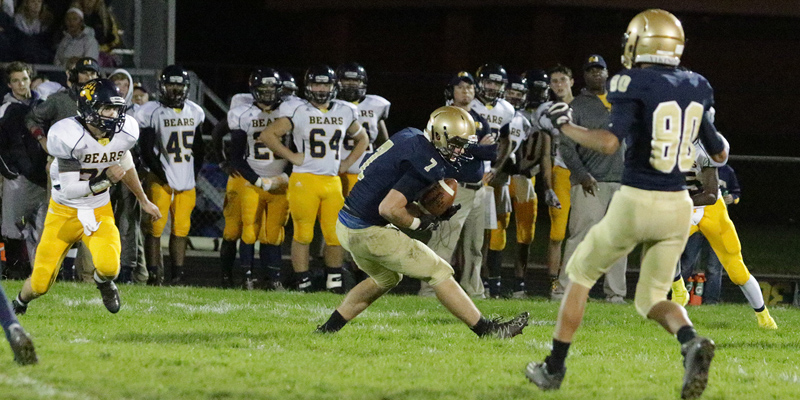 The St. Joe Bears came to Niles and ruined another homecoming night for the Vikings, running away with a 30-0 victory Friday night.

The Bears dominated the line of scrimmage, running over and through the Vikings defense for 240 yards and two touchdowns.

“You saw what I saw. We got dominated up front,” Niles coach Joe Sassano said.

Niles dressed only six linemen and had kids playing both offense and defense, whereas the Bears dressed 14 linemen and were rotating them all night.

“We’re not deep in the line,” Sassano said. We have guys going both ways, and when you have a team like St. Joe who is running five or six linemen in at a time, it just wears on you.”

The Vikings struggled all night to get something going offensively.

The running game only managed 54 yards on 28 attempts and Alex Harpenau only completed nine of his 25 pass attempts, but six of those incompletions came by way of dropped passes by his receivers.

“If you can’t run the football, you can’t have success,” Sassano said. “It makes the throwing game a lot more difficult.”

Niles turned the ball over three times on the night (two interceptions and a fumble), while St. Joe had zero turnovers.

The Bears outgained the Vikings 418 to 195 in total yards.

Mitchell Findeisen led the Vikings with 26 rushing yards, while Cameron Haines had 24 and Skiler Farmer had 21.

Jacob Hamm led the receivers with 43 yards, while Camron Canniff contributed 42 and Findeisen and Farmer had 25 each.

The Vikings fall to 3-4 on the season, dropping their fourth in a row after opening the season 3-0.

“We’ve gotten to the meat of our schedule and we are finding out some things about ourselves,” Sassano said. “We’ve got to keep grinding and try to make a play here and a play there.”

Rangers qualify for postseason with win over Bulldogs