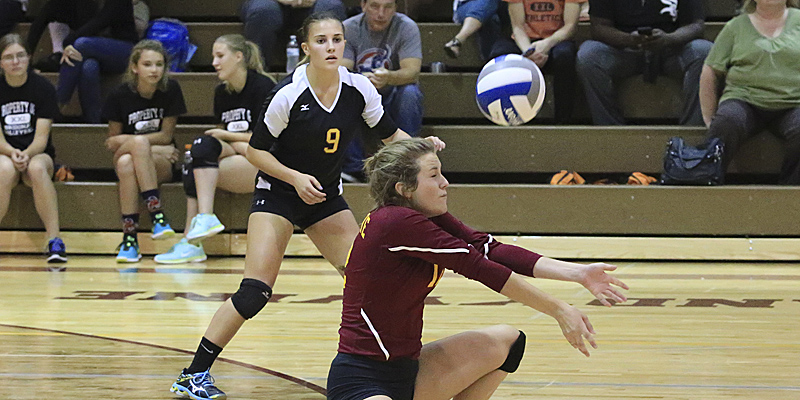 It is an old metaphor everyone has heard before: Save the best for last.

Wednesday night that is exactly what happened when the visiting Bridgman Bees outlasted the Brandywine Bobcats 3-2 in five sets of a BCS Athletic Conference volleyball match.

With the final set being a race to 15, the Bobcats fell behind early, trailing by as many as six points before battling back to tie it at 10-10. Neither team could put together the points needed to win by two until the Bees finally managed to win 19-17.

“That was a tough one, a really, really tough one,” said Brandywine coach Carrie Bidwell. “It was some really good volleyball, but a tough one to lose.”

The Bobcats looked good in the first two sets jumping out to early leads and withstanding every run the Bees could muster.

The third and fourth sets were just the opposite for the ‘Cats as they couldn’t get anything going and found themselves trailing and trying to claw their way back.

“We talked about the importance of putting together a good third game,” Bidwell said. “But I don’t think they realized the maturity and experience needed to make a win happen in that third game.”

The last set appeared to be all Bridgman as the Bobcats looked completely spent early as they fell behind 9-3 before scoring seven of the next eight points to tie the game at 10.

Both teams would get their chances, serving for set point, only to have the other team break serve. After about six set-point serves, the Bees finally got a ball to drop bringing an end to an exciting deciding game.

Makena Bowen, who is slowly returning from a knee injury that has kept her limited to start the season, led the Bobcats.

“I finally feel like she (Makena) is back to where she needs to be,” Bidwell said. “She’s coming off an injury, but she is really looking aggressive and comfortable on the court again. It’s good to see her back.”

Bowen led the Bobcats offensively with 16 kills, while Grace Polomcak added 13 kills and 27 digs, which led the team.

Also contributing statistically for Brandywine was Audrey Longley with 43 assists and Nicole Sachman with 15 digs and 4 aces.

The Bobcats (2-6) will travel to New Buffalo this weekend for the New Buffalo Invitational tournament.

Niles gets revenge with sweep of Lakeview