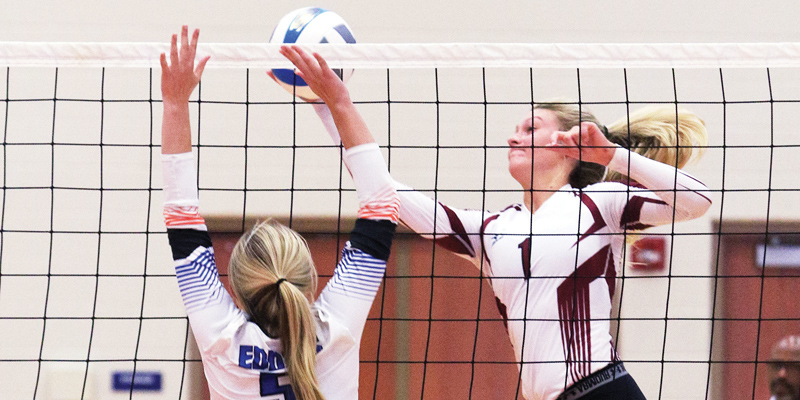 The Edwardsburg and Buchanan volleyball teams came into Monday’s non-conference showdown with 6-0 records.

Both teams were coming in off impressive tournament championships over the weekend and both teams were looking to keep the momentum rolling.

Buchanan has seven seniors returning, not only from a team that has advanced to the regional semifinals each of the last two seasons, but also a group that has played together for as long as they can remember.

While the Eddies on the other hand, only have four seniors returning from a team that finished fifth in the Wolverine Conference last season.

Because of the years of playing together, Buchanan’s defense might be more impressive than their dominant offense.

“They killed us a little bit because they had such good defense,” Edwardsburg coach Chrissy Breisch said. “The shots that normally go down for us, didn’t go down, and I think that frustrated us.”

Libero, Taylor Strauss, was a big part of that defense with 16 digs and consistent play throughout the night.

“I felt like Taylor Strauss and Liz Kuntz both had really good games and were very consistent with their positions,” Buchanan coach Lisa Holok said. “They were continually talking and staying positive and that was good.”

The Bucks had 69 digs on the night, lead by Britta Mollberg with 19, Strauss with 16 and Taylor Reed with 14, while Kuntz pitched in with six blocks.

Offensively, the Bucks were led by Eastern Michigan commit Franki Strefling with 20 kills, while Alex Tobler contributed 12 and Kuntz had 10.

Despite Buchanan’s dominance on the scoreboard, its performance level was anything but dominating according to their coach.

“We had a really good weekend. A really good tournament on Saturday, but we came in tonight and played a little slower than we did on Saturday,” Holok said. “We stayed in it mentally, but we need to physically stay more connected to what we are doing.”

The Bucks (7-0) will practice the rest of the week preparing for the Mishawaka Invitational this weekend.

As for the Eddies (6-1), Breisch saw some things she liked, as well as some areas that need improving.

“We had some good runs of some really good play, but we followed that up with some really bad play,” Breisch said. “I think that’s a frustration that I can see how good we can be, but we just aren’t very consistent right now.”

The Eddies will host Wolverine Conference opponent Allegan Wednesday evening and try to start their conference play with a victory.