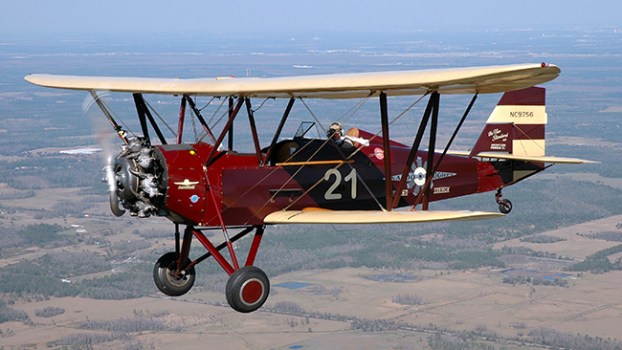 Before getting a chance to watch the fireworks go off in the skies above Friday, visitors to Dowagiac Municipal Airport will have the opportunity to witness the verdant grounds and trees below, from hundreds of feet above the air.

A vintage 1929 biplane will touch down on the runway of the local airport that morning, offering flights throughout the day to people of all ages inside the open-air cockpit of the plane. Up to four passengers will have a chance to ride in the plane at a time, costing $75 per person.

The flights will take place from 10 a.m. to dusk.

The plane, a New Standard 25, is owned and operated by Waldo Wright’s Flying Service, based out of Florida with a branch in Portage, Michigan, where the plane will be flying out of Friday.

The biplane was built and used during the initial aviation craze following the end of World War I in the 1920s and ‘30s, with pilots giving people rides to introduce them to the joys of flight.

“What started in 1995 with the dream of restoring two New Standard biplanes to recapture the ‘Golden Age of Aviation’ has grown into America’s largest vintage biplane ride company,” said Jill Manka, a spokesperson with Waldo Wright in a release to the Daily News. “There are very few of these magnificent airplanes still operating today; in fact, we own two of the seven presently airworthy and flying.”

The company recently reached out to the Dowagiac airport to offer its services to the residents of the community, based off the success of the airport’s Warbirds Fly-In events that took place the last several years, said Airport Manager Oscar Azevedo.

“I seized the opportunity to bring them in,” Azevedo said. “It’s a great opportunity to expose the community not just to this vintage aircraft but to this entire era of aviation.”

People signing up for flights that day will have the choice of wearing vintage-style helmets and goggles provided by the flight company. Each trip will last around 20 minutes, Azevedo said.

“Being up in the sky like that, it’s easy to lose track of time,” he said. “You’ll have such a good time that you will feel like you’ve been up there for hours.”

In addition to the biplane rides, the local EAA chapter will offerg free airplane rides to children and teenagers between the ages of 8 and 17, beginning at 2 p.m. Parental or guardian signature is required for children to participate.

With the country’s birthday right around the corner, a group of dedicated young volunteers are FIREworked up in their efforts... read more