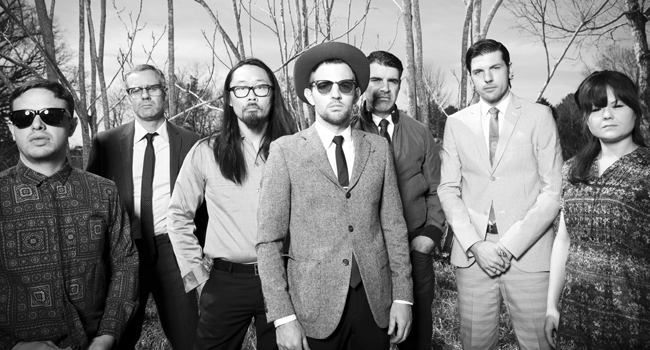 Long time listeners of the Avett Brothers are familiar with the continually evolving sound of the folk rock band, both in recording and on stage.

Growing from the original line-up of Seth Avett, Scott Avett and Bob Crawford playing homegrown Americana, they have expanded through the years to incorporate rock, pop, and orchestral sounds, playing with the energy of a punk band and the heart of storytellers. Live shows now consist of seven players, filling performance venues with a contagious vigor no listener can resist and leaving audiences singing, dancing, and crying both tears of sadness and of joy.

Their upcoming release, “True Sadness,” is their most unique album and the latest example of the band’s constant maturation. It is a journey through sounds previously visited in past albums and unification of elements new and old.

The first single and energetic opener, “Ain’t No Man,” is a soulful sing-along with catchy percussion. The listener finds it difficult to resist clapping their hands and joining in on the chorus before the track’s end. “Mama, I Don’t Believe,” opens with a harmonica reminiscent of The Refreshments or Springsteen. The sweeping strings are a callback to the album “I And Love And You,” and the full sound that came out of the addition of cellist Joe Kwon to the band. It’s with “No Hard Feelings” that we get into the deep of the album, a journey that takes us through feelings both personal and far-reaching. In light of events in Orlando, in Stanford, and around the world, this mellow tribute to love, forgiveness, and compassion are especially relevant and emotional.

“With no hard feelings…lord knows they haven’t done much good for anyone.”

The final lyrics of the song, “I have no enemies,” repeated over and over, are a lesson for us all in our reactions to the difficulties around us.

The album continues in stride, exploring traditional music with banjo, fiddle, and tambourine, before spinning us around with technological rhythms and percussion. By the time we’ve reached the second single, “Satan Pulls the Strings,” we have experienced the most prominent merging of sounds, with visits from the Hammond B3 organ and the electric violin.

The album’s title track makes use of one of my favorite Avett Brother tricks, carrying us along lyrically to a particular emotional space, eventually shifting the music to match the tone mid-song. It is a message of communal penitence and somber reflection, but the music reminds us of hope and recovery. The message and sentiment, especially in the frame of world events, were enough to make me cry on the first listen. The statement, perhaps, is that “true sadness” is of the most genuine and beautiful aspects of life.

The Avett Brothers are skilled most in their ability to communicate the shades of life we each experience. Rarely are the subjects of their lyrics grandiose or out of reach and, even then, they manage to find the commonality of humanity within them. The fierce emotional response to their music by fans from varied backgrounds is the result of their artistry.

With “True Sadness,” they have continued that path, expanding into musical realms that are technological, ambient and catchy, all while managing to keep in touch with their roots in acoustic music and Americana themes. Their musical evolution is much a reflection of that of society. The affecting love and hope it communicates is an example both of their musical prowess and of the paths we should each take forward.

“True Sadness” is available on June 24th. Preorders, tour dates, and information on the band is available at theavettbrothers.com. Head over to anywheretheneedledrops.com to listen to tracks from the album before it’s release.