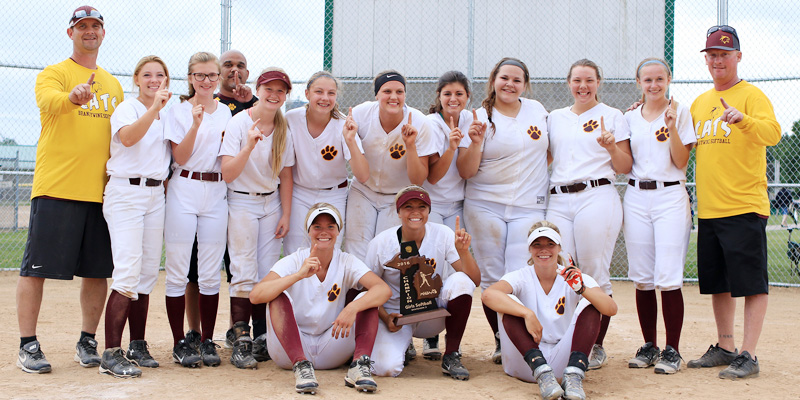 Instead, she decided to gamble and pitch to the two-time all-stater.

The move didn’t pay off as Hartline’s single produced the final three runs in a dramatic 8-7 win by the Bobcats. Brandywine trailed 7-5 entering the bottom of the seventh.

Brandywine, which is a district champion for the first time since 2013, takes a 17-17 record into the regionals next Saturday at Bridgman High School. The Bobcats will meet the Wyoming Lee District winner.

“Who’s going to look at a 15-17 team and think they’re going to win a district championship?” Brandywine softball coach Ron Hartline said. “Confidence was the difference. They finally trusted each other. You get three swings. I told them if they hit the ball that they would beat Buchanan (in the district semifinal) and beat Bridgman.

“They hit the ball.”

Brandywine’s rally in the seventh started with one out when No. 9 hitter Nicole Sachman reached on an infield single. Makenna Hartline walked to put runners on first and second. There were two outs after Sydney Carlson hit herself with a bunt.
Michaela Hartline then stepped to the plate and it appeared she would walk after getting ahead in the count 3-0. She swung and miss on the next pitch. What happened next was magical for the Bobcats.

Michaela singled up the middle, driving in Sachman. When the throw home got past the Bridgman catcher, Makenna came home to tie the game at 7. When Bridgman couldn’t find the ball, Michaela raced home and scored the winning run.

“When (Bridgman) didn’t know where the ball was I just went home,” Michaela said. “This feels pretty good because nobody felt we would get past districts. We got killed by Bridgman (10-0 and 11-1) during the regular season.”

Bridgman scored three runs in the sixth to take a 6-5 lead. The Bees added another run in the seventh.

Run-scoring singles from Sydney Carlson and Michaela Hartline gave the Bobcats a 5-3 lead in the fifth inning.

The return of starting pitcher Morgan Crocker made a difference for the Bobcats. She missed four weeks of the season because of a broken hand. Crocker was able to wiggle out of jams throughout the game as Bridgman stranded nine base runners.

“Having Morgan back is huge,” Ron Hartline said.

A 13-7 win over Buchanan in the semifinals propelled Brandywine into the championship game.

Six Buchanan errors led to 10 unearned runs for Brandywine. The Bobcats first two batters of the game reached base on Buck errors.

A seven-run third inning gave the Bobcats an 11-6 lead. Only one of the runs was earned.

Chelsie Luczkowski and Carlson each totaled three hits for the Bobcats.

Trailing 11-6, Buchanan had the bases-loaded with nobody out in the fourth and didn’t score. Morgan Lenox’s hard hit line was caught by Makenna Hartline at shortstop and she threw to second got get a double play.

“If we could have busted through there I think we might have come back,” Welsh said. “Brandywine has athletes over there. I know their record isn’t great, but they’ve got some hitters.”

Sammi Luzadre, Jade Mosier and Ali Kyles each had two hits for the Bucks. One of Mosier’s hits was a homer.