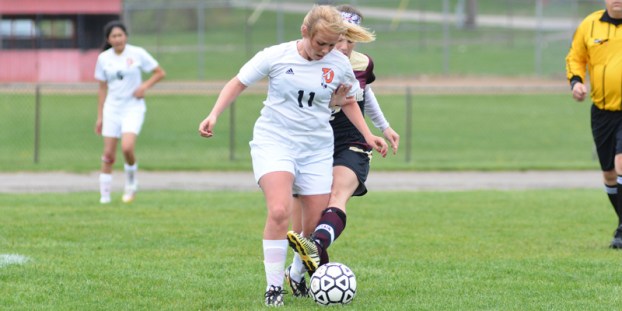 To say the task was a tall one for the Dowagiac soccer team in its home and regular season finale is no understatement.

The Chieftains played host to No. 4-ranked Paw Paw in their final Wolverine Conference match of the 2016 season.

The Redskins wasted little time proving that their ranking is no joke, scoring the first of seven opening half goals in the first five minutes.

Kate Thompson and Lian Glomski both had a pair of goals in the first half, while, Karley Babcock, Emily Nelson and Kaley Buck also found the back of the net.

Grace Richmond ended the match due to the mercy rule 12 minutes into the second half.

“It’s tough to play your final home game of the season against the No. 4-ranked team in the state,” Dowagiac coach Ryan Haines said. “Paw Paw is an extremely talented team and played just like we expected they would. We have an opportunity to possibly play them one more time in the state tournament. Fortunately for us we now have an entire week to focus on practice and getting rested.”

The Chieftains will return to the pitch in Berrien Springs May 31 for the opening round of the Division 3 district tournament.

The winner of the 5 p.m. match will advance to face either South Haven or Fennville on the road June 2.

In the other half of the bracket, Paw Paw will play at either Buchanan or Coloma.

The championship match is scheduled for 11:30 a.m. at Berrien Springs June 4.

Mark Conrad helps keep a smile on the face of his Brandywine baseball teammates. “He keeps us loose,” Bobcats head... read more