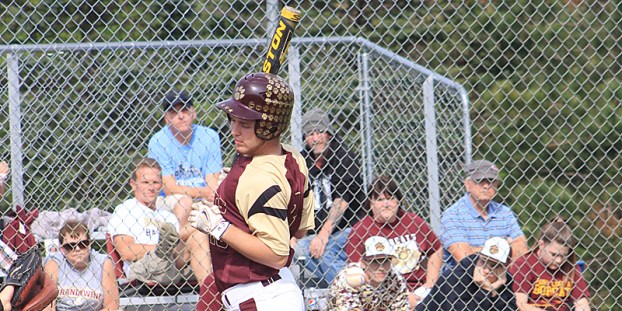 Brandywine’s Zach Grishaber tries to get out of the way of a pitch Monday. (Leader photo/RON HARNER)

The Bobcats (22-11) swept the Bison 6-3 and 12-2 in five innings in a pair of games pushed originally scheduled for Tuesday, but moved up by a day.

Mishawaka has been added to the Brandywine schedule for a single game and is scheduled to visit the Bobcats at 5:30 p.m. Tuesday. It will be “Senior Night.”

“We’ve been putting together better at-bats recently,” Brandywine coach David Sidenbender, whose squad lost to Kalamazoo Hackett and beat Parchment Saturday at the Hackett tournament. “We’ve been hitting the ball harder and putting together quality at-bats. That showed today. We’ve got a aways to go, but we’re still trying to get better here at the end of the year.”

The Cats collected 15 hits — five by Brady Duval — and only struck out twice in 10 innings of play Monday.

In Game 1, Brandywine scored one run in the bottom of the first inning.

Duval led off with an infield single, stole second base, went to third on a wild pitch scored on No. 3 batter Hunter Janowiak’s double to the center field fence. The Bobcats stranded two runners.

Brandywine tallied one run in the second inning.

Austin Balos reached base on a two-base infield error, went to third on a passed ball and scored on Duval’s two-out single to left. The Bobcats left the bases loaded.

After leaving two runners in the first inning and one in the second, New Buffalo cut the gap to 2-1 with one run in the top of the third inning.

Travis Coleman reached base on an infield single. Courtesy runner DuTory Hadley moved to second on Jarek Hotwagner’s single to left and scored on a two-out Tr Maddux single to center.

Zach Grishaber led off by getting hit by a pitch. Pinch-runner Vinny Peel moved to second on wild pitch and scored all the way from second on another wild one.

The other Bobcat run in the fifth scored on the front end of a double steal. When Chandler Plew (on by bunt single) went to steal second, Cole Searles (on by fielder’s choice) took off for the plate and beat the throw.

New Buffalo pulled to within 4-3 with a two-run home run by Travis Maddux in the top of the sixth inning.

Hotwagner led off the frame with a walk and scored when the left-handed Maddux took an 0-2 pitch over the right field fence.

Brandywine picked up two runs in the bottom of the sixth inning.

Balos was hit by a pitch to open the stanza, moved to second on a wild pitch, third on a Jeshua Wiese sacrifice bunt and scored on another wild pitch.

A two-out single to left by Scott Miller plated Duval (on with a walk) with the Bobcats’ sixth run.

In Game 2, the Bobcats busted loose early on offense.

Brandywine scored two runs in the first inning, five in the second and two more in the third.

In the first, Peel reached on an error and scored on a triple to right by Searles. A groundout by Toby Fox plated Searles.

The Bobcats sent nine batters to the plate in the second inning.

Plew and Miller opened the inning with back-to-back singles to center.

Two outs later, Duval singled up the middle to knock in Plew.

Miller scored on a wild pitch.

Duval and Peel (who was hit by a pitch) scored on another Searles triple — this time to left.

Searles scored on a single to center by Fox.

In the third, Plew and Conrad both reach base on infield errors. Plew scored on an error and Conrad was plated by a two-out infield single by Duval.

The Bobcats turned an inning-ending double play in the fourth — second baseman Balos to shortstop Searles to first baseman Janowiak.

Conrad delivered a two-out two-run single to center to plate Janowiak (on by fielder’s choice) and pinch-hitter Brett Jacobs (on by walk).

Miller was hit by a pitch and later scored on a wild pitch for the Bobcats.

Also in the fourth, Bison center fielder Isaiah Ripley ran down ball off the bat of Plew.