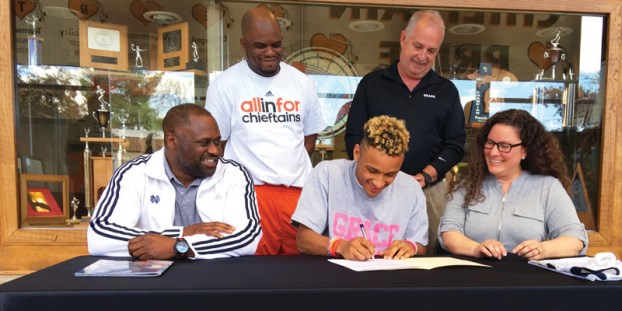 Dowagiac senior Brandon Winchester-Jones has signed a national letter of intent to continue his academic and athletic career at Grace Bible College.

The 5-11 point guard signed his letter of intent Wednesday.

Winchester-Jones is the son of Michele Winchester and Thomas Jones and is a brother to four siblings — Maddie (22), Marcus (17), Jackie (14) and Joshua (10).

Under the leadership of Danum Hunt at Dowagiac Union High School, Winchester-Jones’ high school career was nothing short of spectacular. Winchester-Jones was one of four players in the history of the Cheiftain’s basketball program to reach 1,000 points in his career.

Off of the court, Winchester-Jones got it done in the classroom as a member of the academic honor roll. Winchester-Jones also participated in cross-country, track and field and football throughout his high school career.

He played AAU ball in the springtime for MBA Select.

“I chose Grace because of the family environment,” Winchester-Jones said. “I felt this would best benefit me and provide a wonderful opportunity on and off the court, as well as in the classroom. I am very thankful to continue my educational and athletic career.”

Grace head coach Gary Bailey seemed to be finished with the 2016-17 recruiting class before Brandon stuck out to him at an exposure camp held at Grand Valley State in April.

“We are very fortunate to have Brandon,” Bailey said. “We had decided to wait until after this season to bring in another point guard, but when we saw him at an exposure camp we knew he would be a great fit. It has been a great privilege to get to know his family and we look forward to the next four years.”

Brandon will wear the No. 12 jersey for the Tigers next season, and he will likely be pursuing a degree in sport Management.

Niles senior Sheldon Mudd has signed a national letter of intent to continue his academic and collegiate soccer career at... read more